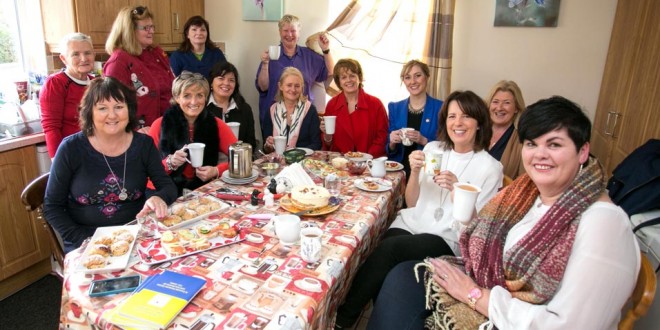 The founder of a well-known cancer support centre has been awarded the inaugural Ennis
and District Soroptimist Woman of the Year award.
The award was presented to Mary Heuson, who has worked tirelessly with her team of volunteers and staff over the last six years without any fanfare.
Slainte an Chláir, which is located at Tir Mhuire, Kilnamona about  five miles outside of Ennis, promises to be a “home away from home” for people who need assistance trying to cope with cancer.
The centre was set up in May 2010 after 400 people turned up for a public information meeting at the West County Hotel in February 2010.
The centre doesn’t receive any funding outside of what it raises itself, including ventures such as its craft fair, which will be held in the Maria Assumpta Hall beside the Cathedral in Ennis this Saturday from 10am to 2pm.  Handmade crafts at the centre will be on offer, along with a bake sale, bric-a-brac, face-painting and lots more.
The drop-in facility gives free confidential information, advice and support to cancer sufferers, their families and carers from diagnosis and onwards through treatment and recovery.
Complementary therapies are available such as Reiki and counselling is provided by Bridget Haren, who teaches patients coping skills, how to relax and reduce stress during treatment.
A spokesperson for Sláinte an Chláir said people at the centre were delighted with this award, as it recognises the huge time and effort given by over 70 volunteers and staff at the centre.
Commenting on the increasing incidence of cancer, the spokesperson noted the head of the National Health Service in the United Kingdom recently predicted one in every two people could develop some form of cancer over the next few
decades.
However, the spokesperson also pointed out the cancer survival rate has increased dramatically, as new technology and medical advances are coming on stream.
The centre has launched a fresh appeal to recruit between 10 and 15 new volunteer drivers in a bid to
cope with the growing number of patients, particularly elderly and those living alone,
who cannot drive for treatment to hospitals in Limerick and Galway.
Soroptimist International Ennis and District president, Denise Cox, said the Soroptimists have been
in Ennis for more than 50 years and have been looking for find people who have made a big
difference in the community.
Recently, the group identified Sláinte an Chláir as an organisation that has made a huge impact in the lives of cancer patients locally.
“Sláinte an Chláir has helped patients and their families quietly but have made an enormous
difference. Cancer affects more people than we realise because all the services at the
centre are confidential.
“The award is being made for the difference the centre has made to the community,” she said.
Ms Cox, who works as a general practitioner in the Fergus Medical Centre, notes while a patient is going through treatment, they get enormous support. However, once their medical treatment is complete, she believes patients are
very vulnerable, particularly those that cannot access centres like Sláinte an Chláir.
“Cancer patients are so used to having horrible treatments, it is great to be able to go to a centre which provides so many nice things such as counselling, Reiki, a new hairdressing and beauty salon and transport to and from appointments.
“The centre helps patients with things like accessing medical cards and how to claim their entitlements and
recently produced a great information booklet.
“It helps people from diagnosis, which is very important because sometimes cancer patients are so shell-shocked after a diagnosis, they don’t hear what they are told in clinics. The centre helps patients to come to terms
and deal with their diagnosis and it really comes into its own when the treatment is
finished.
“There is a great feeling of warmth, friendship and good humour in the centre. There is a special day for men who can visit the centre on Saturday, which is great as men are not good at seeking medical help,” she said.
Dan Danaher

Previous International call-up for Brennan, McInerney and Kelly
Next McMahon family in full voice ahead of final