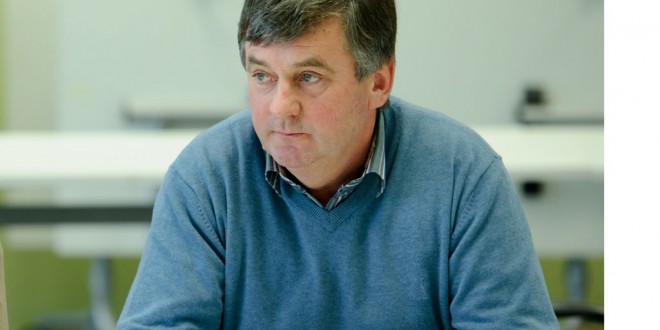 TRICOLOURS and American flags were waving in the May breeze on Wednesday in the centre of Doonbeg, as the Trump visit approaches.

Local farmer Willie Hanrahan is the chairman of the IFA in Clare and he said it is a huge opportunity for Doonbeg. “There’s a great buzz around the place and it’s mighty that the President of the United States is actually coming to this village. It’s absolutely fantastic for the area and let’s hope we can showcase it to the world media.”

He said the office of US president should be respected. “We’re not going to get into the politics of it, he is the democratically elected President of the US, the most important office in the world and we’re delighted to have him here.

“In Doonbeg, we look at the position rather than the person. It’s a great honour for Doonbeg to have the President in our parish, it’s absolutely a great honour. It is something that will be talked about here for decades to come. Like when Obama came to Moneygall, it was a marvellous occasion and let’s hope we can do the same here.”

Non-residents will not be able to drive into an area close to Trump International from Monday until after the departure of the US President.

Some people will be forced to drive circuitous routes to get where they want to go, but he feels it is a small price to pay for the visit. “We spend a fortune on brochures and advertising but you couldn’t buy this type of publicity and advertisement for the village, and we need to embrace it.”

At the hotel on Wednesday morning, the police presence was very noticeable, although it was much less obvious in the village, where locals could be heard chatting about the visit and the measures that are likely to be put in place.
“We hear he is bringing a serious amount of security with him. We’re told there are three jumbo jets coming to Shannon. One with Trump, the other with all the vehicles, personnel in another one. As far as I can gather, the helicopter is coming in a jet. It’s a major logistical and security thing,” Willie noted.

While there are few details that can be confirmed, it is thought that the Trump entourage will run to several hundred people, with some of them having to stay away from the hotel.

“There’s no accommodation left in the area, it’s all booked out. There’s a huge amount of guards and they have to stay and to eat. The security boys, they’re looking for accommodation for some of them because there isn’t enough accommodation in the hotel complex.”

Locals have seen US security personnel in the area in recent days, while there is also said to have been an Irish navy vessel just off the coast but from the start of next week, the security will be really stepped up. The visit will be celebrated in the village when it finally comes around. “There will be something happening every evening in the pubs and the restaurants. On Wednesday evening we hope to have a family evening here in the village, with music in the fair green, set dancing and generally a party atmosphere. We’ve extended an invitation to the Trump family for a reception in the village, but we think it probably won’t happen.”

Trump is expected to play a game of golf on Thursday morning, but little is known about the precise schedule as yet. It is not definitively known when he will leave for the last time, but residents have been made aware that it could be as late as Saturday, if there are delays.

Owen Ryan has been a journalist with the Clare Champion since 2007, having previously worked for a number of other regional titles in Limerick, Galway and Cork.
Previous Clare LGFA Looking Forward To Making Cusack Park Appearance
Next All Eyes On Cusack Park For Clare’s Crucial Munster SFC Showdown With Kerry