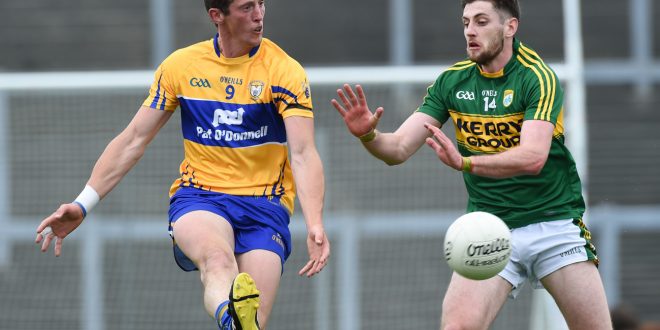 Cathal O Connor of Clare in action against Paul Geaney of Kerry. Photograph by John Kelly.

There has been a lot of talk in the last few weeks in relation to a massive game taking place on Saturday evening.

A traditional heavyweight with years of experience in the bigger competitions taking on a perceived minnow who have climbed from the pack in recent times.

People have also been talking about the Champions League final between Liverpool and Tottenham Hotspur, with suggestions in some quarters that the GAA should have looked at changing the timing of the Clare v Kerry Munster semi-final to avoid clashing with the game in Madrid.

Whatever your thoughts are on that, the fact is that the die-hards of Clare football will be in Cusack Park on Saturday evening, and events in Madrid can wait until the full-time whistle goes. This just matters more.

Clare have been making huge strides since Colm Collins took the reins in 2014 and are now accepted as one of the top 16 teams in the country as another campaign in Division Two awaits. It is a remarkable achievement when you consider the low ebb that preceeded the escape from Division Four. In a cruel twist of fate, the one team that has probably impeded further championship progress is the one that lies in store once more this weekend.

With the new system of the Munster finalists being seeded in the provincial semi-final draws, the gap in the door to progress was never wider. The issue from a Clare perspective is that is always a door-stop dressed in green and gold that seems to get in the way. You cannot help but wonder if Clare had been kept away from their neighbours in recent times, where would that championship journey have taken them? League results in recent times will tell you that Clare now have the measure of Cork, and likewise are a step ahead of the rest. Saturday evening will mark the fourth year in a row that Clare and Kerry square off in the last four of the Munster series, while Limerick and Cork will battle it out in the other semi-final pairing. It just adds to the frustration of consistently seeing the biggest roadblock in the province get in the way while others are diverted around it.

Be that as it may, there is a game of football to be played and that is where the real focus should be. Put simply, if the same Clare team that stumbled over the line against Waterford turn up in Cusack Park on Saturday, then it will be an inevitable result. Something tells me it will not be the case though. The reason for that is that this group of players and management know deep down that they did not even come close to getting out of second gear that evening, and were just lucky Waterford did not capitalise. They often say you learn more about yourself in defeat, but Clare will have taken plenty lessons from that win. The standards that have been set and demanded over the last few years will mean a huge performance is imminent.

The big dilemma for Colm Collins is how to approach this game. Even the most fool-hardy of supporters is likely to admit that going for a straight 15 v 15 shootout with Kerry is only going to end badly. The likes of Paul Geaney, David Clifford, James O’Donoghue and Sean O’Shea will thrive in that kind of environment, so their influence needs to be curbed. The temptation comes when you look at how Kerry are likely to line out at the back. Peter Crowley is out for the season and there are doubts about David Moran’s participation in the middle of the field. For all Kerry’s firepower up front, there could be some chinks in the armour at the back and therein lies the dilemma. Clare could look to push up and exploit that, but the risk factor is the speed at which the Kingdom come when they turn over possession. If the Clare forward line fire on the cylinders we know they have, there is no reason why they cannot engage in a shootout but the supply of ammunition is going to be central to that. The middle third will dictate the story of the game, and Clare need every little break to fall their way. If Sean O’Donoghue is fit, he could be utilised in the half forward line to help set up that platform to launch attacks, and provide the tracking cover when it breaks down. At the back, it would be remiss of Clare not to appoint someone to sit between the lines, with the likes of Sean Collins having the football brain and the ability to spot a pass that is needed to fill that role.

Match ups will be key, with a whole plethora of attacking attributes likely to unleashed on the Banner defence. Clifford and O’Shea are two of the most exciting talents in the game, while O’Donoghue and Geaney have been around long enough to know when to do the damage. Clare will likely detail Gordon Kelly to go and interview one of the young guns, while Dean Ryan will also have a crucial role to play in trying to keep them quiet.

If the bookies are to be believed, it is a game Kerry will win comfortably. That is just another reason to never trust a bookie. This is a game that Clare will not let go lightly, and you can rest assured that Colm Collins and the rest of the management will have watched the league final on repeat to see how Mayo set up and exploit the weaknesses. On the other hand, Kerry will have learned very little from Clare’s win over Waterford but were never likely to have paid much heed to it either. It is a game that is set up for Clare to have one almighty cut at their visitors, but everything, and maybe even more than that, needs to go right if they’re to turn them over.