The Phoenix in the centre of The Clare Champion masthead has a special significance. The Phoenix was a mythological bird sacred to the sun, which was reborn from the ashes of the funeral pyre. It epitomised the power of self-regeneration.

The Clare Champion’s phoenix represents the re-birth in March 1903, of a nationalist voice in Clare after The Clare Man was forced to close. The Clare Man, first published seven years 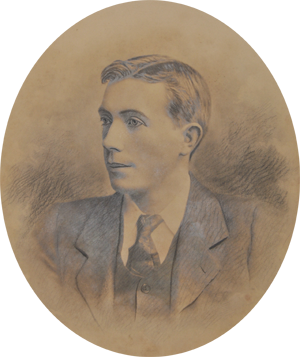 previously, was involved in a libel action. There was no money to meet the costs and the property and equipment, including the precious typeface had to be sold.

It looked as if a strong and forceful nationalist voice had been silenced. But the Editor of The Clare Man, Mr. Tom Galvin, and his staff decided otherwise. On the week that the assets of the old paper were being auctioned, they went to work and produced the first edition of The Clare Champion. The phoenix had certainly risen from the funeral pyre of The Clare Man.

It was, by any standard, an incredible performance. There was practically no machinery and little type but men like Tom Galvin, Jack Kerin, with works foreman, Michael Moloney, James Melville, Michael O’Doherty, Patrick Lynch, Patrick Kerwick, Michael Brody, Michael McDonnell, Michael Moloney and a host of friends produced the first Clare Champion two days after its predecessor had been sold by public auction.

The paper was set up in Nono’s printing premises in O’Connell street and the formes taken to Limerick where the paper was printed by Guyes. The late Pappy Garrihy, a long-time member of the composing staff of the ‘Champion, used to recall with pride his own involvement with the first issue of the paper. The night before the auction of The Clare Man, Pappy and a number of others climbed through the windows of The Clare Man office and carried away bags of typeface.

Tom Galvin’s first editorial was unequivocal and set the tone for subsequent editions. This is what he had to say:
“The ‘Champion will stand as the inveterate foe of landlordism, shoneenism, grabbers and Castle hacks. The wants of the people will be firmly espoused in our columns until their grievances are redressed. We shall agitate for an Irish Ireland and an Irish Parliament to govern and make laws for the Irish people. Should the present Land Bill not meet the requirements of the tenant farmers, we shall loyally support their cause until justice is done them and until the last vestige of landlordism disappears from the country.
We shall loyally and strenuously support the United Irish League and the Irish Nationalist Party. As a Catholic paper also it will be our duty at all times to expose bigotry and corruption, whilst maintaining Catholic rights with a firm but tolerant spirit. The question of the establishment of a Catholic University will have our heartiest support. The Gaelic League and the Gaelic Athletic Association may always look on us as ardent supporters of their cause. A friend of the labourer and the artisan, local affairs and the development of local industries will be looked to, and, in fact, in every sense, we hope to make the ‘Champion worthy of the best traditions of the Banner County.”

The Irish People, a contemporary nationalist newspaper, described The Clare Man as “The pluckiest and most straightforward of journals in Ireland. Always in the van of the nationalist movement, it proved a tower of strength to the organisation which today stands all powerful in the Banner County”.

Tom Galvin was described as a fearless and patriotic editor by the Ennis Board of Guardians. Mr T. Considine, at a Board meeting, stated: “The Clare Man and Mr Galvin have proved themselves the friends of the county. They have advocated and fought persistently for the Nationalist cause and exposed our wrongs and denounced our enemies. They should not be forgotten by any man or any body presuming to be nationalists… Even this very day they are fighting and suffering for the National cause.”

The Clare Champion second edition told its readers of how the birth of the paper had been received. William Redmond M.P. wrote a congratulatory note. Congratulatory messages also came from United Irish League branches in Clare. Support was pledged by Ennis District Council and Tulla Board of Guardians. And the Limerick Leader which also espoused the nationalist cause, added its voice to the welcome and praise of the ‘Champion and its owner, Mr Thomas Galvin who had resurrected it from the ashes of The Clare Man. The ‘Leader described Mr Galvin as “a man of go, energy and soldierly intrepidity”.

The ‘Leader also stated: “The Clare Champion is a valuable adjunct to the Irish National cause in general and to the tenant farmers of Clare in particular. The sale on Friday was phenomenal for a provincial journal and that its future will be attended with the same measure of success cannot be questioned. It is well written, bright, newsy and fearless in its endorsement of the views of the clientele for which it caters.”

Tom Galvin had not enjoyed good health. Publishing a newspaper under such trying circumstances had its effect. He died a young man on December 7, 1903, eight months after the paper was born. On his death, the management of the paper was taken over by his sister, Mrs Josephine Maguire with her husband, Sarsfield Maguire as editor. The bold policy of the paper was continued and despite threats, the ‘Champion continued to publish the meetings of Irish Ireland groups. The blow fell in 1918. A detachment of military entered The Clare Champion and removed sections of the machines and from April until September of that year the ‘Champion was silent. The paper could have continued publishing if a guarantee was given not to print “subversive” and “seditious” articles. Sarsfield Maguire refused to give any guarantees.

Late in 1977, the major decision was taken to use the more modern web-offset printing system in place of the older hot metal. After a period of training, the first Clare Champion in this new form was published in late April 1978. In 1979, the newspaper moved to new plant and offices beside the existing print shop. In 1994, Flan Galvin retired and John Galvin has now taken over.

Many people have been associated with The Clare Champion over the years. Andy McEvoy came to the paper in 1925 as Editor. He retired in 1950. Earlier one of the paper’s reporters was Pat Quinn who later moved to Dublin to become the political correspondent of the Irish Independent. Larry DeLacey was the Editor for most of the 1950s and was followed by George Mulvey and Frank O’Dea who came to the paper in 1959 and retired in 1996. The present editor is Austin Hobbs, who joined the paper in 1979.

Of the many people associated with the works staff of The Clare Champion, the late Sean Moloney, a nephew of a former works foreman, held the same position, and later was Works Manager for over twenty years. Billy Madigan, a well-loved personality used to recall the time the British Military took away part of the machinery in 1918. Pappy Garrihy, another Ennisman, was on the composing staff of the paper for over fifty years