Home » News » Pupils teaching a prince about the Burren 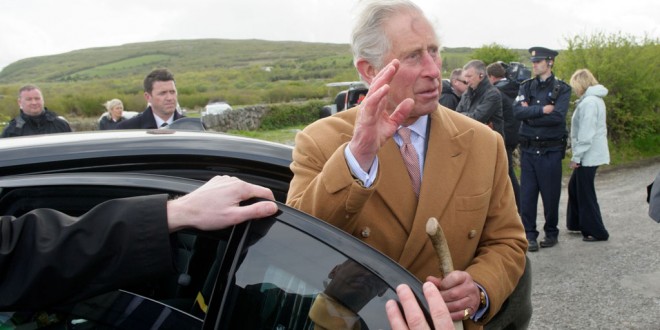 Pupils teaching a prince about the Burren

Windswept, and waiting hours on the side of a limestone hill took little out of four young experts, on hand to educate the future king of England on the local area when he visited the Burren on Tuesday.
The local children, all graduates of the Burrenbeo 20-week Ecobeo educational programme, instructed Prince Charles on archaeological, historic, geological and ecological features of the local landscape.
The sight of the helicopter accompanying the royal motorcade as it weaved towards the Nagle farm in Pullaghcarron eased the boredom of waiting to meet the heir to the British throne for the primary-school pupils.
Watching it, 12-year-old Eoin McNamara, a pupil at Carron National School, revealed his hopes for the historic arrival of the Prince of Wales in the Burren.
“I keep expecting it to be like the Olympics, when the Queen parachuted out of the helicopter,” he said.
His classmate, Aoife McNamara, was philosophical about her upcoming brush with royalty. “He is just a person, flesh and blood like the rest of us,” she said.
Later she noted that Prince Charles’ flesh and blood may have been at a slightly different temperature to her own. “He said we were really cold and our hands were really cold and his were warm,” she remembered. Apt then that their conversation centred on a nearby erratic, an Ice Age phenomenon.
After her meeting with the Prince of Wales, when she told him about the flora and fauna of the Burren, 12-year-old Bella Rose Rooney from Boston National School described him as “really nice”.
Thirteen-year-old David Mullins, also from Boston National School, was decked out for the weather with his Massey Ferguson woollen cap and Ballinasloe Horse Fair jacket. This proved to be a talking point after he had finished telling the student prince about a mound of rock and earth mixed together, known as a fairy jump.
“He asked me what school I went to. I told him. He asked me did I go to the Ballinasloe Horse Fair and I told him I did. Then he asked was it still going,” David explained.
Five musicians from Coole Music, the Kinvara Quintet, named after where they all go to school, performed a number of pieces for the prince as he completed his circuit of the Nagle farm. As he left, he engaged the teenage musicians (Josh Conneely Baker, James Kavanagh, Alannah O’Connor Dunford, Hannah Piggott and Anna Tierney), asking them where they were from and a bit about their musical selections.