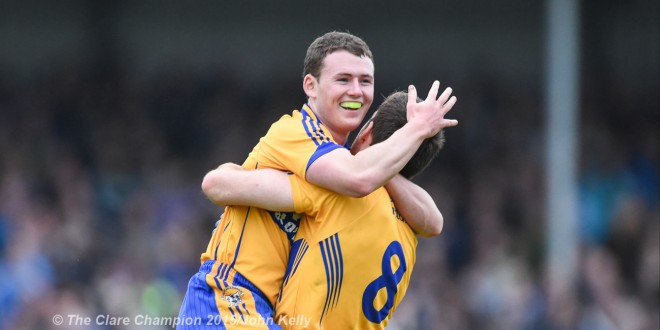 ALTHOUGH not as fluid in the second half, during which they lost their shape at times, Clare showed that when it mattered they had enough to get over Limerick and qualify for a Munster semi-final with Cork in Pairc Uí Rínn on June 14.
The impact from the bench was key to Clare’s second successive championship win over Limerick. Rory Donnelly and Cathal McInerney put over two points each with the latter scoring Clare’s final points, which secured the result.
[doptg id=”69″]

In fact all of Clare’s substitutes made an impact with Davy O’Halloran getting on plenty of ball at centre forward, although he did kick one wild wide. While Keelan Sexton was only on the field for a couple of minutes, he found McInerney with a superb cross field pass for Clare’s last score.
Inspired by Gary Brennan in the opening half, Clare led 0-9 to 0-4 at half time. The Clare captain scored the first of his four first half points in the 14th second after Cathal O’Connor won the throw in and laid it off to his partner who ran away from Tom Lee to fist over an excellent point.
He added three more, one from 50 yards while Eoin Cleary, on his first championship start, put over two from play. Podge Collins, Shane Brennan, who did very well in the middle third and Cathal O’Connor from a 45, completed Clare’s first half tally. Unfortunately Shane Brennan had to leave the field with a shoulder injury following a collision with Seánie Buckley in the second half.
The fact that Limerick goalkeeper Brian Scanlan was Limerick’s top scorer with two frees, underlines how poor they were in the first half. Corner back Robert Browne scored their only point from play while Ian Ryan pointed a free.
However come the second half Limerick stepped it up considerably. Darragh Tracey managed to keep Gary Brennan somewhat out of the game while Ian Ryan and Seanie Buckley came more into it, while the positioning of Gearóid Hegarty at full forward lead to Joe Hayes having to come off his line to deal with a flurry of high deliveries.
Clare were the better team but between now and their meeting with Cork they will work on remaining in the game for longer and taking their chances when they present themselves.
While Clare led by five points at the interval, it would have been much more had they not kicked seven wides.