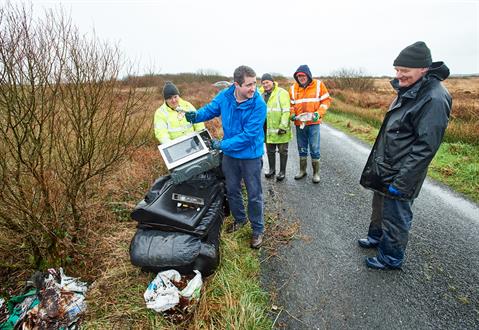 Clare County Council is to install CCTV cameras, both covert and mounted, around Shragh Bog in Doonbeg in the hope of shedding light on those responsible for the indiscriminate dumping of domestic waste in the locality.

Doonbeg Development Association has ambitious plans to develop walking routes around the parish and have just started work on the provision of a looped walking route at Shragh Bog.

However, members of the association were infuriated to discover that the route, a short distance from the Wild Atlantic Way, has become a major blackspot and the scale of illegal dumping “defied belief”.

Clare County Council’s environmental community warden for West and North Clare, Conor Leyden has been working with the group in an effort to address the issue and next Tuesday he has organised for a private contractor to be on site for a major clean up operation.

“Doonbeg community group is very proactive and doing great work on the ground in the village, doing a lot for the tourism product. Unfortunately, when they opened up this particular bog area for development as a walking route they were abhorred to discover the level of illegal dumping.

“This bog is only about a mile outside the village. It is an isolated road, there are no houses on the road and it loops back to the village. I suppose for those responsible for the illegal dumping, the isolation of the area limits the chances of they being caught engaged in the activity,” Mr Leyden highlighted.

He said the majority of the rubbish is domestic and a lot of the waste such as bottles, glass and cans is recycleable.

“That the area is so isolated is the problem. We find that where illegal dumping occurs, the culprits like to have a loop. I can’t say it’s all coming from the village but unfortunately if we don’t have an address we can’t really go any further with it.

“We are going to put CCTV in this area. We are putting permanent structures in place and monitoring the area with cameras. We are also going to use mobile cameras and we will move these around in the more isolated areas.

“The signs could be 5km or 10km away from the black spots. Where we have the permanent structures there will be a sign stating that waste activity is being monitored,” he added.

Mr Leyden acknowledged the work of the Doonbeg Development Association in trying to grow the tourism product in the village given that it’s on the Wild Atlantic Way, home to the Trump Doonbeg golf resort and how it is being undermined by the actions of a minority.

“Doonbeg as a village is working so hard to draw people in. They are trying to get something out of tourism, to make the most of the opportunity and you have this going on.

“They are trying to develop these walking routes, inviting people out to walk and to see this waste being generated is shocking. Those responsible for the dumping are doing a lot of damage to the tourism product and the environment.

“Animals and livestock can get to this waste, it can become contaminated and it can also leak into streams and water courses,” he maintained.

Mr Leyden revealed that members of the Doonbeg community group were bagging rubbish dumped in the more awkward areas and moving it to a more convenient location for collection.

“The members are sifting through the rubbish when bagging it to get it out of awkward areas. They are checking for evidence. Some times we are lucky and when get people they are hit with on the spot fines. When we get the bigger cases we go to court. When we find the evidence to get a prosecution it is great,” he said.

Mr Leyden said that there are a number of dumping black spots around West Clare and illegal dumping is also occurring in Monmore Bog, near Kilrush.

“I’m on the road every day. As the enforcement unit here, we are covering nearly 1,100 complaints a year. You’d be shocked at the scale of illegal dumping in the more isolated areas.

“We will also remove waste from Monmore Bog during Tuesday’s run. This is where the wind mills are; there are lots of tracts and roads attracting people in and these are quite areas,” he added.

“For Tuesday’s operation we are using a private contractor because we need a truck with a grab. That bill will be picked up by the tax payer. We are hoping that once we get on top of it, have the places cleaned up and the cameras in place that people might take a bit of pride and be more aware of the damage they are doing by dumping waste illegally,” he said.