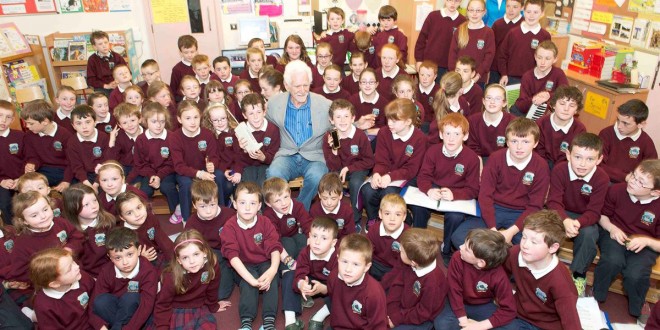 Hoping to be featured on News2Day, a children’s news programme, shown each day on RTÉ 2 at 4.25pm, the South Galway school invited RTE’s Western Correspondent Pat McGrath to the school to publicise the project funded by Galway County Council.

“The aim of the project was to produce a drama, based on a theme inspired by classwork, using puppets,” she continued.

The children in infants and first class chose to retell the story of The Gruffalo by Julia Donaldson and Axel Scheffler in animation form, while second and third classes chose the legends of Setanta and Fionn from their history work. The Senior Room, made up of fourth to sixth classes, were inspired by Greek mythology.

“The puppets were quite unconventional, large scale figures twisted from sheets of brown paper, a method Tommy had been developing. Simple as it sounds the effect is quite enchanting. An Irish wolfhound, a fiery dragon, a Cyclops and other mythical beasts populate the stage with the children as they tell their incredible stories,” Ms Fenlon outlined.

“So impressed were the News2Day team that they proposed it could be covered on the main evening news also. Feedback from the school community has been very positive as everyone is so proud of the children’s work. But the school also received congratulations from viewers around Ireland,” she added.

Ms Fenlon paid tribute to the hard work, commitment and enthusiasm of the children in preparing the drama projects.

The premiere of the shows took place in Labane Hall. The production of the Gruffalo by Kiltiernan NS is available on YouTube.