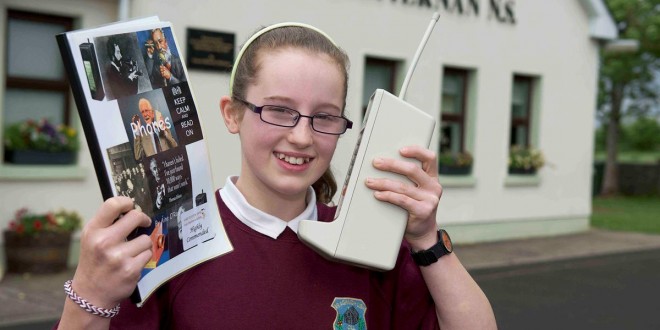 Áine O'Rourke from Kiltiernan National School Co. Galway who wrote a book about mobile phones. Inventor of the hand-held mobile phone Marty Cooper and his wife Arlene Harris the 'first lady of wireless' popped into the school to meet Aine having heard about her project from the Ciaran Cannon TD, Minister for State in the DES. Photo:Andrew Downes

TWO of the world’s most influential inventors visited a small South Galway school this week, prompted by a series of coincidences.
All the pupils of Kiltiernan National School take part in the annual Write-a-Book project, run by Galway Education Centre. The children each write a book in just six weeks and it was one by Áine O’Rourke, about telecommunications, that led to Friday’s visit. While he is not a household name, Marty Cooper’s invention is something that almost every adult and many teenagers own and use multiple times per day.

“On a recent visit to our school, Ciarán Cannon, Minister for Training and Skills at the Department of Education, launched our newly updated website. He is very interested in the myriad of ways IT can be used to support learning and education in schools,” explained teacher, Bríd Fenlon.
“Coincidentally, we had a display of our Write-A-Book projects in the hall. Minister Cannon is very interested in technology and these books, published using Microsoft Word, illustrated with images from Wikipedia and Google and Bing Images, impressed him enormously. But it was a book by sixth-class pupil, Áine O’Rourke, which really grabbed his attention. Áine wrote about the development of the phone from Alexander Graham Bell to Marty Cooper’s invention of the mobile phone – Mr Cooper’s photograph appeared on the cover. Minister Cannon quickly asked for permission to take a photograph of the cover and predicted that Marty Cooper would be pleased and impressed to see it. And he was,” Ms Fenlon revealed.
“Minister Cannon was working on EXCITED – The Digital Learning Festival at the time and was going to be speaking to Marty Cooper. He told him about Áine’s book and showed him the cover and he was so impressed he decided to pay a visit to our school, while he was in Ireland for the conference,” she added.
The normal routine of Friday morning spelling tests was happily disrupted on Friday, when news came that the inventor of the hand-held mobile phone, Marty Cooper, was calling for a brief visit to Kiltiernan NS on his way to Shannon Airport.
Marty, accompanied by his wife and fellow inventor, Arlene Harris, known in the United States as ‘the first Lady of Wireless’ for her work with Samsung, had been attending communication technology conferences in Dublin and Achill over the previous days.
School principal, Edel Leech only learned of the special guests the evening before they arrived.
“Text-a-Parent served to organise flowers, food and our three-teacher staff rehearsed a welcome from our musicians from first to sixth class. Imagine the anticipation in our school as the mobile phone was again used to great effect to inform us that Marty Cooper was in Claregalway…Oranmore…just two minutes away in Kilcolgan. By the time he arrived, the whole school, assembled in the middle room, with some of our parents and the director of Galway Education Centre, Bernard Kirk, was so excited,” explained Ms Leech.
“Marty Cooper proved to be a warm, soft-spoken and self-effacing man who only wanted to be called Marty. He shared his own excitement at the stir his invention has caused around the word since 1972. Then, with just a little dramatic flourish, he pulled out the original prototype, from a leather satchel and passed it around to the children. They were astounded by its size, the flat, grey plastic casing and its weight. Marty explained that this phone only ‘talked and listened’. It didn’t have a camera or access to the internet, which mobile phones have today. He quipped, ‘You wouldn’t spend hours talking on this phone as your arm would ache’,” she added.
Marty spent half an hour talking to the children, making himself available for photographs and talking to staff and parents.
“Everyone was so impressed by his warmth and he was very moved by the welcome he received. Although pressed for time, our parents’ council insisted he take some freshly-baked scones for his journey back to the States, as he could not stay for coffee. He was very touched by second-class pupil, Seán Cunningham’s admission that he had got up at 5am to Google him. “You didn’t need to do that,” Marty replied and they high-fived. He left in a flurry of photographs of him with his prototype phone, with our very special author, Áine and some hastily grabbed selfies. Then he, his wife, Arlene and Minister Cannon were gone. It was only 10.45am,” Ms Fenlon recalled.
“The only evidence of this unique visitor was his autograph in our visitors’ book and the buzz he and his wife left left in their wake,” she concluded.
Mr Cooper autographed a copy of the book for its author, Áine, who kindly agreed to return the favour by autographing a copy of the book for Mr Cooper to take with him.