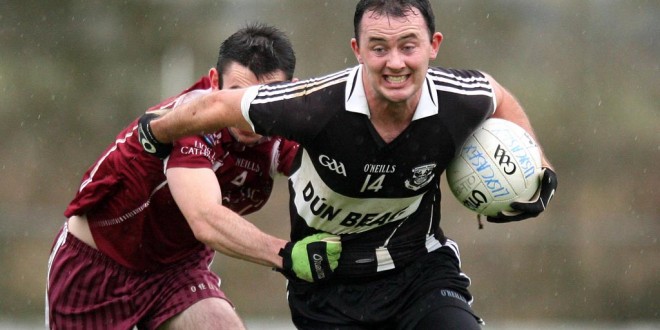 An outstanding performance from team captain David Tubridy steered Doonbeg to a three point win (0-15 to 0-12) over Lissycasey in the second of the Clare senior football championship semi-finals on Saturday.

The win on a Kilmihil pitch that held up remarkably well considering the continuous rainfall before and during the game means that they will play Cratloe in next Saturday’s final.

This was Tubridy’s day and the Clare star kicked ten of his side’s fifteen points. Tubridy’s display allied to a powerful third quarter when they scored 0-6 without reply, turned the tables on a young Lissycasey outfit that had started impressively and raced into a 0-4 to 0-1 lead after ten minutes.

Another key factor in the magpies victory was the introduction of Shane O’Brien for the second half. The dual player came in at centre forward and he helped create a number of the winner’s second half scores on a day when Colm Dillon was another to play a key role in the win.

Meanwhile, Eire Og had some measure of compensation for their defeat in the first of the semi-finals a week earlier when they qualified for the under 21 A final with a 1-11 to 1-6 win over the amalgamation of Kilmihil, Shannon Gaels and Killimer. In the final the town side will take on their neighbours St. Josephs.

On the hurling front, Scariff retained their senior B status when they had a three point win over Smith O’Briens in a replay at Ogonnelloe. The result means that the Killaloe side drop to intermediate level for next season.

Another team dropping down a grade for next season is Ennistymon. They lost their intermediate hurling relegation play off with Crusheen by the minimum margin on Saturday evening in Shannon. The final score here was 0-19 for the winners to 3-9.

Kilmaley were crowned under 15 A hurling champions when they recorded a comfortable win over Clarecastle. The same clubs meet in the minor A hurling final this weekend