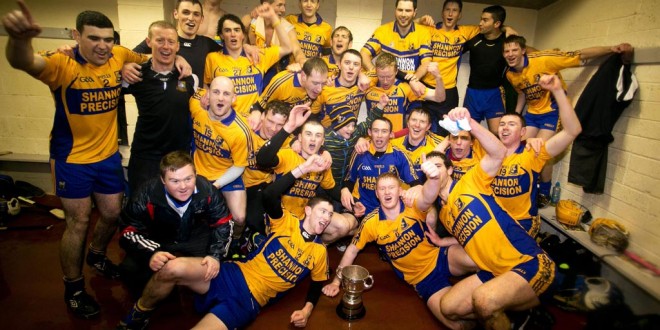 Sixmilebridge celebrate their win in the senior championship.

Eleven years after their last title win, Sixmilebridge are back as Clare senior hurling champions. At rain lashed Cusack Park on Sunday, they dethroned champions Newmarket in a fiercely competitive tie.

The final scoreline of 1-10 to 0-11 is an accurate reflection of a tie which produced some great hurling despite the atrocious conditions.

The winners had a dream start when top scorer Niall Gilligan scored the game’s only goal as early as the second minute when he drilled a penalty to the net following a foul on Alan Mulready.

From here they held the lead until two minutes from the break when Colin Ryan levelled. The holders hit the last five points of the half to move from being three in arrears to holding a two point lead at the break, 0-9 to 1-4.

A hungrier Sixmilebridge returned for the second half and they held their neighbours and great rivals scoreless for twenty six minutes during which time they hit five points to take a lead of three inside the final five minutes. Gilligan hit four of those points with the other one coming fromthe stick olf Jamie Shanahan who was named as the man of the match.

Points from Mike McInerney and Colin Ryan inside a minute cut the margin to the minimum with three to play and suddenly extra time loomed. It wasn’t to be however and veteran Niall Gilligan had the final say when he fired over a great point a minute from time to seal victory and spoil Newmarket’s hopes of retaining the crown.

The win means that Sixmilebridge will travel to Cork next Sunday to play the Cork champions Midleton in the Provincial semi-final with the winners going on to face Limerick’s Na Piarsaigh in the final. Interestingly, the Limerick champions are managed bySixmilebridge man Sean Stack. He led his club to their first Clare title back in 1977 and went on to be a central figure in six further successes with the new Clare champions.

Meanwhile Ballyea were crowned the Clare senior B champions when they defeated O’Callaghans Mills earlier on Sunday. In a tie played at Sixmilebridge, Clare football captain Gary Brennan played a key role, hitting all three goals in his side’s 3-15 to 0-11 win