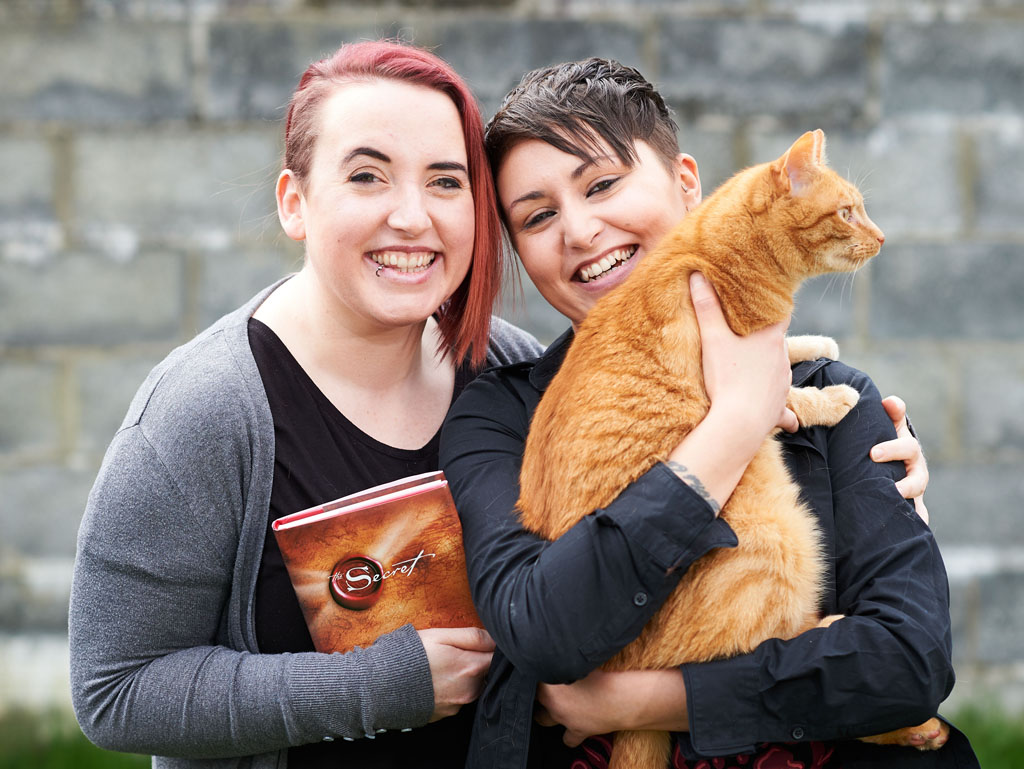 Faye Bradley and Marina Murphy who have won over 113 prizes in the past year to date, pictured with their cat Butch. Photograph by John Kelly.

The law of attraction

When they got in touch with The Clare Champion last Wednesday, Faye Bradley and Marina Murphy had won 110 prizes in different competitions over the past year.

By the time they called into our office on Thursday afternoon, they were up to 112 and later that day, it rose to 113. The figure was up to 114 by Monday.

The Ennis-based couple believe their phenomenal winning run is down to their use of the Law of Attraction, a philosophy that has gained prominence over the last 12 years, particularly due to the film The Secret and the book of the same name.

One of the couple’s favourite prizes to date was a VIP experience to celebrate the 30th birthday of the National Lottery, won by Marina.

“I had put the National Lottery into my vision board, it’s like a board of things you want in your life and you put it up on your wall. Generally, the things on the board come to us.”

They had a great night at the event in Dublin, she recalls. “They put us up in a five-star hotel, the Weston. They gifted us the National Lottery champagne glasses and filled us full of champagne for the night. There was a limousine ride to the party in RTÉ and home again.”

Both believe that Marina’s visualising of the prize brought the experience into being. “I wanted to win the Lotto. I put champagne glasses on the vision board. I had ‘we are winners’ put on it and a picture of Faye and myself. What I won was to go to the National Lottery’s birthday party and they gave us the glasses. The glasses manifested but I didn’t get the money. Yet!”

Those who have read The Secret will be familiar with some of the main tenets of what the two women are talking about. It argues that people can attract what they want towards them in life, through visualisation, positive thinking, meditation and actively being grateful for everything that is positive around them.

A cynic no more

Many people are dismissive about the ideas they expound and once upon a time, Faye was among the sceptics. “When Marina told me about the whole Law of Attraction thing and The Secret, I was like ‘no, that can’t be true, that’s insane, that kind of thinking can’t be right’. I fought with her for ages over it.”

Marina adds, “She was like, ‘I’m going to prove you wrong and then you have to drop this bulls***’.”

Even though Faye was only doing it to prove Marina wrong, she soon changed her mind.
“I said I’d give it a shot, what’s the worst that can happen. I started doing the vision boards, the mindfulness, the gratitude lists. Literally, within a week, we started winning.”

“We have a lot of friends who, when they saw us winning things on Facebook, they all started to enter double or treble the amount of competitions that we would, but with no result. So we were trying to figure out is this what is working for us, this whole positivity, believing that we’re winners. It seems to be working, today we won another two. Hopefully tomorrow, we’ll win more.”

She feels that while positive attitudes have brought them success in many competitions, negativity brings the opposite outcome to others.

“I’ve noticed a lot of people enter and they say ‘oh I never win these things’. Usually the people who say that don’t win. That’s the whole thing behind the Law of Attraction, what you say or what you think about yourself or your life or your situation becomes your reality.”

Marina says it is important to focus on positives. “When you visualise, don’t ever doubt that you can do whatever it is. Don’t think about what you don’t want. Even if you say ‘I don’t want something’, the fact that you are bringing it up is giving it attention.”

People who complain quite a lot are drawing yet more circumstances to themselves that are likely to give rise to complaint, Faye feels.

“Did you ever have a friend or a family member and all they do is give out about things that have happened to them? ‘Oh, I was in the coffee shop the other day and your man spilled his drink on me’. Or ‘I lost something’, or ‘I was in the queue in Dunnes and someone hit off of me’. Every experience they talk about is negative. That used to be me. Back in my life, when I was extremely negative, everything that could have gone wrong went wrong. But the minute I started taking on this way of thinking, it changed. I would go into places thinking we’re going to have the perfect experience here, if it was going into a restaurant or going on a plane somewhere, anything, I would just think this is going to be amazing. We haven’t had a bad experience at all since we started this. Everyone we come across is lovely.”

A graphic designer, she feels her outlook has brought her a measure of success in her work too.

“I do a lot of graphic design and that kind of stuff. I said I’d love for someone to come to me and get my work out there. Literally a couple of days later someone got in touch with me on Instagram, a talent scout for an international art magazine. They said they’d like me to apply to get into their magazine, next thing it was in the magazine. I’ve been doing the same amount of work online, the same hashtags to try and get out there. But during the period that we were doing all this positivity and gratitude, it worked well.”

She had a month-long lull in her winning streak and believes it was because she was in an unhappy frame of mind. “I was in a place at one time where I was stressed out for a month, I didn’t like what I was doing. For the whole month, I didn’t win something. She kept winning! But for that whole month I didn’t have one win and I swear it was because my energy and everything was low. The minute I made the decision to get away from that situation, the wins flooded in. I think I had six wins in a week after that. It’s strange how you can co-relate the wins.”

Our Attraction
in Action

The couple have a Facebook page called Our Attraction in Action, on which they put updates on their wins. Faye says they have had some good feedback.

“It’s a perfect way of showing what we’re doing and how it’s working for us. This morning we got a message from a woman who heard us on Clare FM. She thanked us for reminding her to be positive and stuff. Yesterday she heard that, then she started writing down what she wanted, doing affirmations, basically what we’re saying on the page. She woke up this morning to a competition win.”

Being grateful for the positive things in life is an important part of their approach. They regularly write out long lists of things to be thankful for. Faye says she didn’t find it easy at the start but she believes it works for her.

“When I started writing the gratitude lists, even while I was writing, I was asking myself am I really grateful for this or am I just writing it? Then you start getting these feelings of gratitude and things start popping up. You get that phonecall you weren’t expecting from someone that leads to some opportunity that mightn’t have happened if you were in a negative space in your head.”

Having a majority of positive thoughts is very important, Marina believes, even though many people need to adjust their settings to achieve it. “Some people, 100% of the day, 90% of their thoughts might be negative and 10% might be positive. You need to have the scales with at least 51% positive. I used to be more negative than positive.”

last Wednesday, Faye Bradley and Marina Murphy had won 110 prizes in different competitions over the past year. By the time they called into our office on Thursday afternoon, they were up to 112 prizes and later that day, it rose to 113.
Previous Anthony plans trek through Siberia
Next Injury time heartbreak for Newmarket Celtic