Home » Regional » Ennis » The Castle brings village back to life 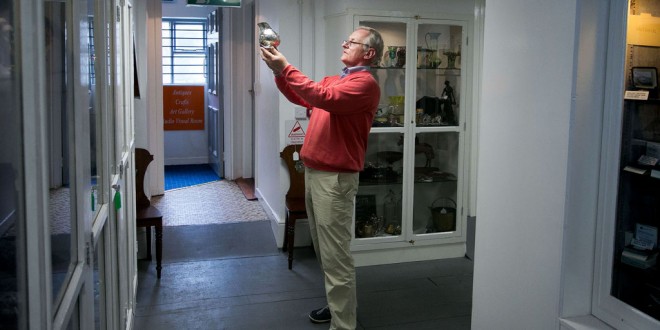 The Castle brings village back to life

MORE than 40 craftspeople, artists and antique dealers have already taken retail space in the newly-opened arts, antiques and craft centre and restaurant at the former Coach House pub in Clarecastle.
The Castle, a three-storey building, has been given a €1m restoration through the partnership of antiques expert, Paul Walsh – who operated in the nearby Antique Loft premises across the road for many years; coach operator, PJ Keogh, of PK Travel; and tourism and accommodation specialist, Emelyn Heaps, of Renaissance Resorts.
Walsh also had a successful antiques business in Kilcolgan, County Galway, which he sold two years ago, thinking to retire and spend more time indulging in his hobby of horse-training. However, his friend, Emelyn, had other ideas.
“Emelyn said to me, ‘Your building would make a great craft building’ but I told him it’s not big enough on its own. It might be okay for crafts but it’s not big enough to make it a draw for people. He said, ‘You’re probably right’ but he came back to me a few weeks later and said, ‘I was telling PJ (Keogh) abut the idea for the Antique Loft and you saying it’s not big enough and PJ said, ‘But the Coach House across the road is for sale’.
Having looked at their areas of expertise, the three men felt they would make a good fit and bought the premises and spent the past nine months renovating and setting up the new business.
Open since the start of June, The Castle boasts a 50-seater coffee house and restaurant and three floors of arts, antiques and crafts for sale. More than 40 retailers have taken space, either in cabinets or on the floors and walls throughout the building.
“We also have a yard outside, which may become something for arts and crafts as well,” Paul said.
At the heart of the village, The Castle is a focal point that ties in very well with the castle/barracks at one end and the picturesque housing at the other.
“It has just lifted the spirit of the village. Genuinely, people are so happy about it. The building was so bad that, no matter what people did, it made the whole place look derelict. Now they see this interesting building. It’s got great colours and a bit of art on the outside; it’s interesting and there’s a bit of life about it. I think it has drawn the centre back into the village,” Paul said.
“The only limitation is what we put on it ourselves. It’s a fantastic building and has already made a big difference to people locally,” he said. “The craftspeople are working away and selling a few things. It’s great for their confidence and maybe it will be the start of a bigger business for some,” Paul said.
The Castle prides itself on supporting local and Irish craft and the development is designed to allow the visitor to browse and amble through the halls and floors of this unique outlet, where they will have the opportunity to purchase top-quality goods at prices appealing to all budgets.
The new enterprise has already helped people who are producing crafts locally to get into business, for as little as €10 a week. The ground-floor Cabinet Room has 16 display units, containing crafts, antiques, jewellery and other small items and varying spaces are rented out to retailers.
Larger items are catered for throughout the building’s main and smaller rooms and The Castle even has its own theatre company.
Award-winning theatre artists, Zara Starr and Conor Madden operate The Unlimited Dream Machine, offering a multi-layered audio and visual installation that explores national and local history.
“The future is probably in arts and crafts. There needs to be a big hub in Clare, bringing them all together. I’ve also been asked to lease the Antique Loft across the road but I’ve refused because it’s there to back this building up and I don’t know what the need will be yet. It might be workshops, it might be more studios or a theatre,” he said.
Now up and running, the partners are meeting with tour operators and executive travel planners, pursuing their own plans for packages for locals and visitors, with bus tours calling to the centre for shopping; food and theatre; developing links with local bodies to keep tourists in the village, with natural and historical walking tours; and a crafts and arts hub and annual fairs, where the nearby airport at Shannon is brought into the equation to ferry visitors from European and UK centres to Clarecastle.

Re-development of Clarecastle to create space for community