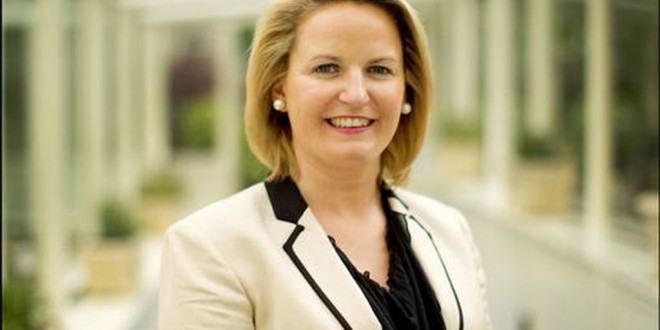 EAST Galway Labour Senator, Lorraine Higgins has been selected as the party’s candidate in the constituency for the 2016 General Election.
Senator Higgins is the Seanad Labour Spokesperson on Foreign Affairs and Trade and was nominated to the Seanad by the Taoiseach, Enda Kenny, in 2011. She had run in the general election earlier that year but was narrowly beaten.
Last year, she ran as the Labour candidate in the Midlands-North-West constituency in the European Parliament election.
Speaking at the Labour Party convention in her home town of Athenry on Friday, Senator Higgins said she planned to win a seat in Dáil Éireann.
“In regard to the question of whether or not I can win, the simple answer is yes. The perception that Galway East is not Labour heartland no longer applies. At the last election, we turned that thinking on its head, when the party received almost 8,000 first-preference votes, enough for me to take a seat next time around.
“And the great thing about a democracy is, it is you – the voters – who get to make the choice on whether or not you will vote for me,” she said.
The 35-year-old reminded those in attendance that she became active in politics six years ago, angry at what was happening in the county as a result of the recession.
“Thousands of jobs were being lost every month. People, especially those of my generation, were leaving Ireland to find a brighter future elsewhere, away from their families. I have to say, I was not only angry about what was happening. I wanted to do something about it. As a young woman in my 20s, I couldn’t just stand by and do nothing. I knew I had to make a contribution and speak up on behalf of my generation, for the future of my area and this country,” she said.
“I had just returned to Athenry, after living in Dublin for seven years, where I was training and practicing as a barrister. I was shocked to see what was happening in places like Athenry, Loughrea, Portumna, Gort, Tuam and Dunmore.
“In particular, Athenry had been a thriving, confident community and was a place of hope, optimism and growth. Local people had local jobs. Young people were able to stay in the town, live, work and raise their family.
“They were able to enjoy life in the place that they were born. But in 2008 and 2009, almost overnight, all that was changed,” Senator Higgins added.
The Athenry woman outlined some of her achievements as a Senator.
“I’ve taken on Facebook, Twitter and Ask FM for failing to protect children and I’ve even taken on the GAA in the last few weeks for failing to have Leinster championship matches in Galway. I’ve kept people in their homes when they were at threat of repossession.
“I’ve attended social welfare hearings for people to get their benefits. I’ve fought for medical cards. I’ve drafted legislation to make our online world safer for our children. I’ve worked hard at promoting positive mental health, particularly among school children.
“I’ve provided free legal advice clinics and I’ve organised CV clinics to help people get back on the jobs ladder. I do all this, as I am in politics to do my best for Galway East and, just as importantly, to improve the lives of the people I represent,” she told the party faithful.
She said she was not involved in politics to “make up the numbers”, adding that she wants to be part of a Government that gets people back working, gives children and pensioners free GP care and reduces tax