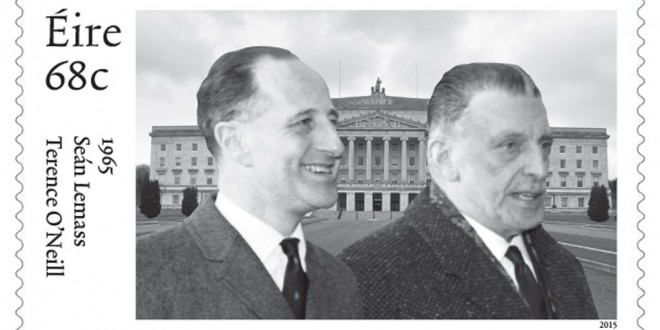 Sean Lemass and Terence O'Neill featured on the commemorative stamp.

The 50th Anniversary of an historic meeting between then Taoiseach, Sean Lemass and the Prime Minister of Northern Ireland, Terence O’Neill is marked today (Thursday) with the release, by An Post, of a commemorative stamp.

The groundbreaking meeting took place in utmost secrecy in January 1965 and marked the first invitation to an Irish taoiseach to take part in official talks with the Northern Ireland prime minister. The event was a brave venture in North-South relations and began a thaw in relations between the two states. A return visit took place in Dublin in February of that year.

The 68c stamp, designed by Red&Grey Design of Dublin, features an image of O’Neil and Lemass outside Government Buildings at Stormont. The stamp can be purchased, along with a special First Day Cover at leading post offices, at the stamp shop in Dublin’s GPO or online at www.irishstamps.ie.

Sean Lemass (1899 – 1971) was taoiseach from 1959 until 1966 and one of the leading Irish political figures of the 20th century. His opposite number, Terence O’Neill, was a reforming Unionist leader and prime minister of Northern Ireland. Both men shared a pragmatic approach, which led to a level of engagement which would have been unthinkable in previous administrations.

The optimism that surrounded the historic meeting was short lived and events began to spiral out of control just four years later. 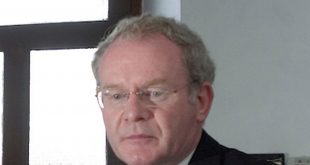