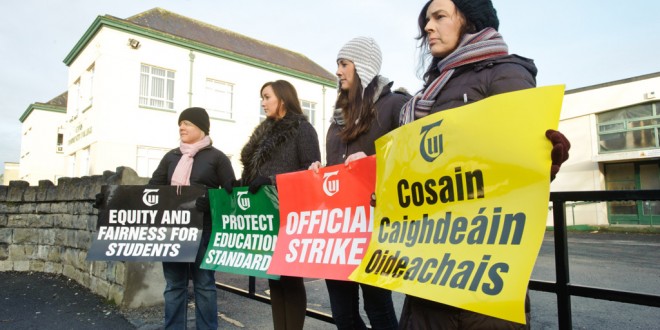 Ennis Community College/Gaelcholaiste An Chlair teachers on the picket outside their schools in Ennis. Photograph by John Kelly.

Second-level schools around the county are closed on Thursday as teachers stage their second strike, protesting against changes to the Junior Cycle.

More than 7,000 students in Clare were advised not to turn up to classes as hundreds of members of the Association of Secondary Teachers of Ireland (ASTI) and the Teachers’ Union of Ireland picket schools.

Teachers say the changes, planned by the Department of Education, will undermine standards and fairness.

A total of 27,000 second-level teachers are on strike because they believe aspects of the Junior Cycle proposals pose a threat to education standards, fairness and quality. Teachers also have concerns about the capacity of the current system to accommodate such major change.

Talks between teaching unions and the Minister for Education and Skills Jan O’Sullivan, TD, were held last week in relation to the implementation of Junior Cycle reform.

“It will result in our second-level students missing another day at school, cause inconvenience to parents across the country and result in teachers losing another day’s pay.  There is no basis for this strike action – I have moved significantly to achieve agreement and both sides should seriously engage in negotiation on that basis.  This dispute will not be advanced one iota by continued strike action.

“Junior Cycle reform is necessary and overdue.  Parents’ organisations, the Irish Second Level Students Union, management bodies and a wide range of education experts are fully supportive of my reform package.  Industrial action should cease as I believe that more detailed talks can result in progress,” she said.

The strike by members of the ASTI and TUI follows a day of strike action in December.

The presidents of the ASTI and TUI this morning (Thursday) reiterated that they are willing to engage in talks without preconditions in a bid to resolve the dispute.

They stated that the strike is necessary because there has been no breakthrough on teachers’ key concerns and because the Department of Education and Skills has refused the unions’ request to defer implementation of the Framework for Junior Cycle until the dispute is resolved.

The TUI said teachers had “no option but to proceed”.

ASTI President Philip Irwin said: “We want a first class Junior Cycle education for all students. We fully agree that project work, portfolio work, practical work, and other methods of evaluating student learning are vital elements of a modern, forward-looking system, but we believe that they should be externally assessed for certification purposes. There are also serious and justified concerns over the capacity and school and system level to deal with the current proposals. We believe a resolution can be found, but teachers’ serious concerns must be listened to and addressed. Teachers must have confidence in the change they are implementing in their classrooms.”

The ASTI Standing Committee and TUI Executive Committee are to consider further industrial action over the Framework for Junior Cycle in the coming weeks. 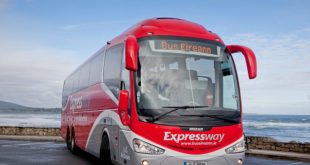