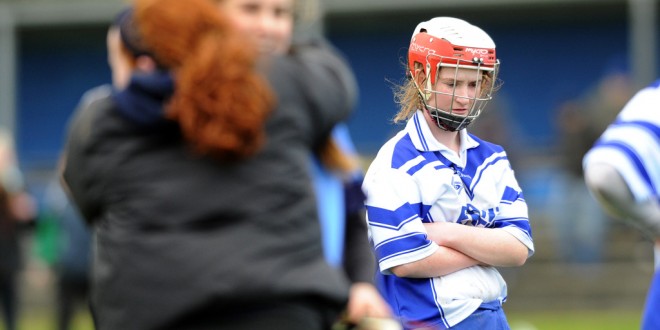 A dissapointed Laura Browne of St Flannan's following the loss to St Mary's of Charleville in the Munster Senior A Colleges Camogie championship final at Newmarket. Photograph by John Kelly.

A WEEK after making history by winning the Munster senior A colleges camogie championship title for the first time, St Flannan’s bid for another first died at windswept Newmarket-on-Fergus.

With a number of the history-making senior side in their line up, St Flannan’s took on St Mary’s Charleville in the junior A decider at Fr Murphy Park but, despite a strong performance in very difficult weather conditions, they had to give best to the visitors

The winners defended superbly when playing against the strong breeze in the second half and this proved decisive on the day when they failed to register a score in the second period.

The Charleville outfit elected to play with the breeze in the opening half and for the opening twenty minutes there was nothing between the sides. With the teams level at 0-2 each with ten minutes remaining in the half, things looked good for St Flannan’s but the visitors finished the half strongly, hitting 1-3 without reply to take a six point advantage to the break (1-5 to 0-2). Their lead would have been greater but for a superb save by Flannan’s goalie Doireann Murphy on the stroke of half time. Over the course of the game, the Clarecastle player produced some outstanding saves ,while full back Teresa O’Keeffe also excelled for the Ennis school.

It was a game dominated by the respective defences, when the North Cork school’s backline really excelling in the second period.

St Flanna’s will now turn their attentions to preparing for their All-Ireland senior semi-final against Magherafelt from Derry.