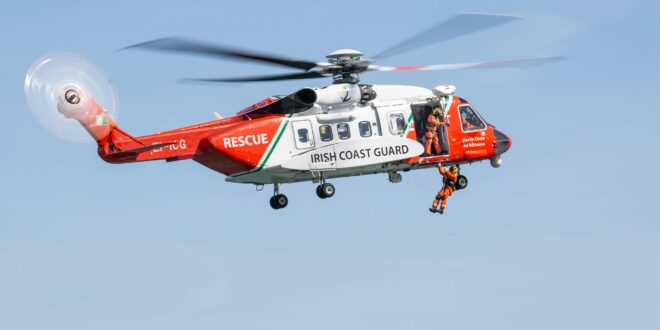 Shannon-based Irish Coast Guard helicopter, Rescue 115 which was on standby for the SpaceX launch.

THE crew of Shannon-based Irish Coast Guard helicopter, Rescue 115, were on standby during the early hours of Monday morning to assist the SpaceX Crew Dragon mission launch from Cape Canaveral in Florida. After the launch, Brendan Meehan, Chief Crewman Standards with Rescue 115, told The Clare Champion, that the Shannon crew were prepared to rescue the four astronauts on board in the event the mission was forced to abort before making it into orbit, and touchdown in the Atlantic Ocean anywhere between 50 and 200km off the Clare coast.
“It’s quite an unusual event, and I suppose the chances of us being called to action were probably slim. Nonetheless, we were ready to fly out to rescue the astronauts on board. We had been briefed on the make-up of the capsule, how the hatches open and how it would be sitting in the water.
“Our job would be to fly out to the capsule, collect the astronauts and bring them to the nearest hospital, in this case UHL, to be checked out. The US Air Force also had a team on stand-by at one of their European bases to assist,” he said.
Delayed from it’s original launch date of Saturday due to unfavourable weather conditions, the launch saw three Americans, Michael Hopkins, Victor Glover and Shannon Walker, and Japan’s Soichi Noguchi blast off at 7.27pm (12.27am Irish time) from the Kennedy Space Center in Florida, bound for the International Space Station.
The launch was a success and 12 minutes after lift-off SpaceX confirmed that it was on the right orbit to reach the ISS a little more than 27 hours later, at around 4am Irish time on Tuesday.
SpaceX, a private American aerospace manufacturer and space transportation services company, is owned by Elon Musk. The company’s Falcon 9, the rocket used for this mission, is a two-stage rocket designed for reliable and cost-efficient transport of satellites and SpaceX’s Dragon spacecraft. The capsule carrying the crew is launched on top of the Falcon 9 rocket. After separation, the rocket lands back on a drone ship and can be reused.

Full launch video here. For mention of Shannon scroll to 4.20.50 (just over 8 minutes after launch)