Home » Sports » “Next Week You Might Not Hit A Barn Door” 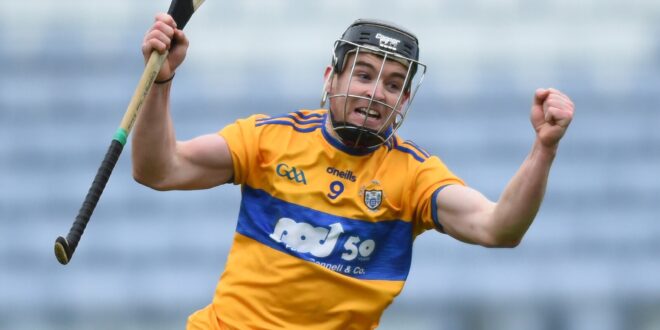 “Next Week You Might Not Hit A Barn Door”

An already packed trophy cabinet got a new addition as Tony Kelly picked up another man of the match award for his scintillating showing against Wexford on Saturday afternoon.

There is surely a holding spot already cleared for a second All Star award too, while the 2013 Hurler of the Year is surely now heading the shortlist for that accolade once more.

1-15 of Clare’s total came the way of the Ballyea man, but he was quick to deflect the praise onto those around him in the aftermath of the win.

“Next week you might not hit a barn door, that is just the way the conditions are in this winter hurling. Sometimes the easier job is to put the ball over the bar, the harder job can be to win the puckouts, win the breaks and put the shoulder to the wheel. We don’t really mind whoever gets the scores. I have to mention Shane O’Donnell every single week he goes out. He gets criticised for not scoring but himself and Conor Whelan are probably the two best forwards in the country for winning their own ball and their work-rate in setting up scores. He does the same thing every day he goes out, and Cathal Malone is the same. I could not speak highly enough of our work-rate in the forwards” he noted.

That work-rate saw Clare surge 10 points clear at the half time break with Kelly’s own tally accounting for that lead. He felt that strong start to the game was vital but was always confident Clare had what was needed to put in a solid showing.

“Whether fairly or unfairly, we were written off a bit but we knew ourselves there was a performance in us. At the start of the year, we were moving nicely and the layoff didn’t really help. There was a lot written last week that we only beat Laois by a point but we felt it was a bit disrespectful towards Laois and ourselves. A win is a win no matter no matter who you beat in championship and that small bit of momentum from last week helped again this week, especially with the conditions. We knew that if we won the toss and built up a bit of a lead, it is hard to come back from that no matter what it is. Things broke our way in the first half and we built up a bit of a lead in the second quarter. It was a 10 or 12 wind in that first half and to be honest, we would not have been happy with how we played up until the first water break. Wexford had all the hurling done and kept us at bay. Our half back line and midfield came thundering into it with the likes of Pat O’Connor, Rory Hayes and Conor Cleary driving forward with ball, We didn’t waste much in that last 15 minutes of the first half. We got scores and built up our cushion. The big thing for us was coming out at start of the second half when Diarmuid Ryan got a point to settle us and we got another one. Doing that into the breeze really settled us and we managed the game from there. Keeping our goal intact was massive and that was the main aim” he said.

Kelly’s goal in the final quarter proved to be the nail in the Wexford coffin and he admitted that a green flag was something they had targetted.

“We spoke at half time that if we could get a goal, it would be a massive score. The objective was to hit their net and keep it out of ours. With that breeze and when you have the cushion, if you get a goal it takes four scores to get it back again.We knew if we could keep them at arms length we would get there. They did build up a bit of momentum and I thought our lads settled it down really well. They used the conditions to belt it over the sideline, and kill a bit of time. We have integrated a few new lads onto the panel but there are plenty who are around for a while now and that is really important too” he stated.