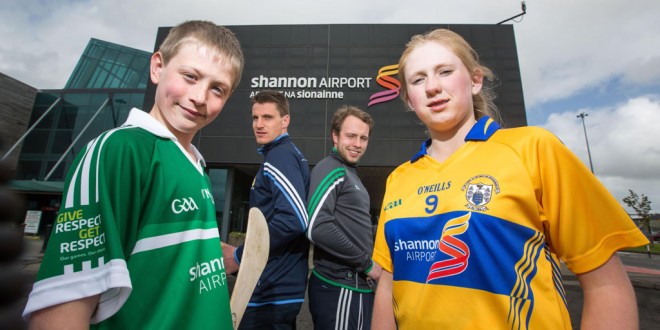 Young hurlers and footballers from across Munster will get an early taste of their own “field of dreams’ as they line out in this year’s Munster GAA Primary Games.

This weekend, the Shannon Airport sponsored initiative will see pupils of Clare and Limerick schools go head to head in both football and hurling at half time in championship games.The format in both codes is 11-a-side.

The young footballers will be first into the fray at Cusack Park in Ennis on Saturday evening, as Clare play hosts to Limerick, in a home and away arrangement.

On Sunday, Semple Stadium in Thurles will be the venue for the eagerly awaited Clare v Limerick Munster Hurling Championship first round game. Again at half-time, pupils from the respective counties will entertain what is expected to be a large crowd.

The county jerseys that will be worn in the half-time in the Primary Games were unveiled as two key figures in Sundays hurling championship, John Conlon of Clare and Limerick’s Paul Browne, at Shannon Airport.

This year’s Shannon Airport Munster GAA Primary Games will see almost 400 boys and girls from all six counties of Munster line out in their county colours at the provinces major venues.