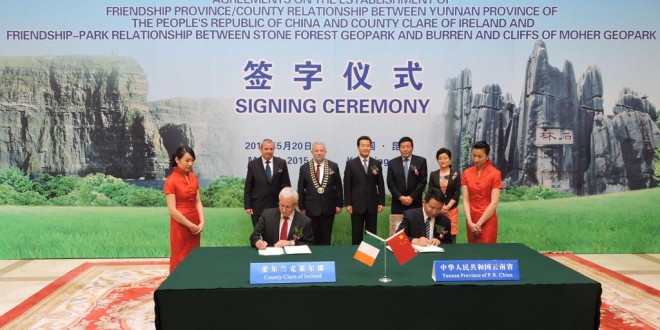 A delegation comprising officials and members of Clare County Council is in China to officially mark the county/province relationship, as well as establish a formal link between the Burren and Cliffs of Moher Geopark and the Stone Forest Geopark (Shilin Geopark) in Yunnan.

Officials and members of Clare County Council and officials and public representative of the Chinese province today (Wednesday) signed an agreement aimed at developing close industrial, tourism, farming, educational and cultural ties between the regions.

Yunnan, which has a population of more than 46 million, is located in the far southwest of China and borders Vietnam, Laos and Burma.

Cathaoirleach of Clare County Council, John Crowe ,who tabled a council motion calling for a twinning arrangement between the two regions to be explored in 2012 following the visit of the Chinese President to Clare, commented, “This is a historic occasion for the people of County Clare and Yunnan Province. Though separated by thousands of miles, this agreement we are committing ourselves to will seek to bridge the gap through a shared spirit of cooperation, mutual understanding, exchange of knowledge and more importantly, friendship”

Chief executive of Clare County Council, Tom Coughlan said,”Like the Burren and Cliffs of Moher Geopark, Yunnan Stone Forest Geopark is renowned for its karst landscape and it is also a UNESCO recognised geopark. Clare County Council and the Yunnan provincial government have recognised
these common links and therefore, I am delighted that both organisations have now officially committed to exploring the potential to generate positive tourism, educational and farming benefits for both regions.”

Those involved in the day-to-day operation of both geoparks have much to learn from each other but it is clear that this agreement lays the foundations for a mutually beneficial relationship, one that can be nurtured and developed further in the future,” added Mr. Coughlan.

The Clare delegation is scheduled to return to Ireland tomorrow (Thursday).