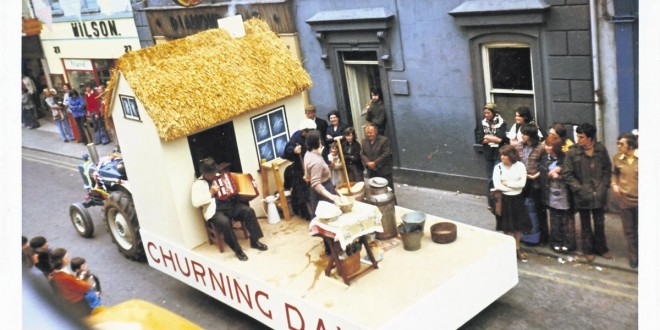 Photos reveal the fun of the Fleadh Nua

THE very first Fleadh Nua in Ennis was held in 1974 and, as the festival prepares to celebrate its 40th milestone, one family recalls those first days, having uncovered a set of photographs documenting its rich heritage. 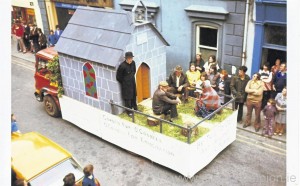 In 1961, the prominent public house on O’Connell Street, now known as Brogan’s, was owned by the Hogan family. Brian Hogan and his wife, Joan, ran the business there up until November 1976. It was then, as it is now, renowned for its traditional music and entertainment and, when the Fleadh Nua began in the town, it was one of the moments they recall with great fondness.
The Hogans’ son, Senan, who lives in Kildysart, was given a stack of old photographs by his aunt, Kitty Heffernan from County Waterford, who used to travel to Ennis to help out the Hogan family during this busy festival period.
It is believed that these photographs date to between the first Fleadh Nua or, at the latest, the second or third festival, as the family left the pub in 1976. Still in incredible condition and showcasing the vibrancy, colour and joy the Fleadh Nua brought to the town of Ennis, Senan believes they were a wonderful find and couldn’t have come at a more opportune time, given this year’s celebrations.
“The Fleadh Nua has always been a major event and a busy one for the town of Ennis, since it began. I remember going to the Boys’ National School and there were people pitching tents there and in the Fairgreen. It brought loads of people to the town and there were plenty of characters too. They came from all over and right across Europe, as they still do,” he said.
Senan recalls growing up in the centre of it all, having lived at that time on O’Connell Street, and said it was a great experience to be among the sessions.
He recalls his aunt, Kitty, coming up from Tramore to the Fleadh Nua to help out and, even after they left the pub business there, it was her love of the atmosphere and the music that kept her coming back to the Fleadh Nua.
Senan’s father, Brian, was a chef and, having overcome a fire in the building in 1971, which resulted in substantial refurbishment of the building, his father fell into ill health and subsequently gave up the business.
He recalls his aunt, with what he described as “a very good camera” at the time, taking the photographs they have uncovered. He is hoping they might bring back fond memories for both the people of Ennis and visitors, who came to the county town some 40 years ago for the Fleadh Nua, and indeed the many who continue that tradition.
Speaking about the evolution of the Fleadh Nua, vice-chairman of the committee, Frank Whelan, said it started out as a three-day event and is now an eight-day festival.
At the outset, he said, “The outdoor aspect of it was huge.” He continued, “It was almost like an All-Ireland Fleadh. There were huge crowds. There were tents out in the fields and the park, and the huge floats. The town was able to take them at the time and you hadn’t the same restrictions on the streets then as you do now.
“It has evolved quite a lot since those times. There is now more of an emphasis on the indoor events. The changes to the street layouts sounded the death knell for the parades in particular,” he recalled.
Although they no longer feature, Frank said the parades did span a great many years in the history of the Fleadh Nua. He remembers, when he was chairman in 1999/2000, that one of the largest parades the festival had seen took place.
“At the millennium, we had the millennium drum, which was built in Dublin. It was a huge thing and it took a 40-foot lorry to carry the drum. After that, the streets changed and got narrower and it wasn’t possible around the O’Connell Monument to manoeuvre the lorries around.
“Our concerts now would be the big thing. One of the big concerts this year will be the Brian Boru Suite, which has been specially commissioned by Comhaltas to mark the millennium of his death,” he concluded.
This concert takes place in Glór next Friday, May 23. The Fleadh Nua gets underway on Sunday and runs until the following Monday, May 26.