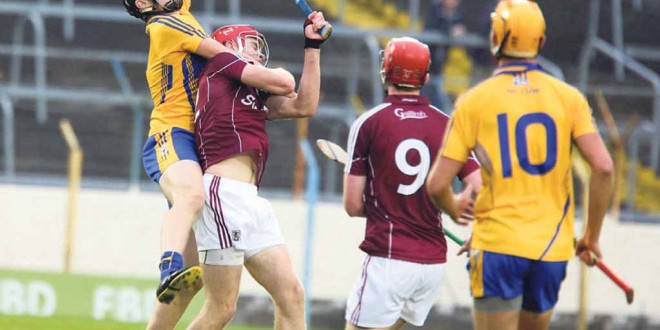 Clare’s joint manager Gerry O’Connor described the second-half performance by Clare as “phenomenal”.
“The way it transpired was exactly as we had predicted. We reckoned the first half would be really low scoring, a real and out and out dog fight and that’s exactly how it turned out,” he said.
According to the Éire Óg clubman, “Donal [Moloney] said to the lads at half-time, in the most positive way possible, that they needed to move up a gear. The second-half performance was just phenomenal, the running off the ball, the support play. Alan O’Neill at centre-back was awesome, to be fair to him. Peter Duggan started winning puck-outs but Tots’ [Cathal O’Connell] movement off Peter Duggan was phenomenal.”
“We have been on the road with these guys for four years now. That was the 2010 minor team. We have such a passionate affinity with them that it’s unbelievable. We had a team meeting with the guys on Monday before this match and the senior players spoke.
“The way those guys spoke, there was no impression whatsoever that the senior lads were in a senior All-Ireland. The senior All-Ireland was parked and they told all their teammates that. There was unbelievable leadership shown by those particular guys, Davy Mac, Galvin, Tony Kelly, Podge Collins and Shane O’Donnell,” according to O’Connor.
“We have no idea in the county how lucky we are to have these guys in really difficult financial domestic times. It’s an unbelievable thrill for us to work with these guys but it’s a huge thrill also for the Clare supporters to have something to cling onto over the last three or four years when things were difficult,” O’Connor continued.
As to Clare’s involvement in two All-Ireland finals in the coming weeks he said, “We haven’t thought about two finals. We take it one match at a time. The two managements co-operate and there is huge communication between the two. Right now we are going to take all of this panel and they will do their rehab and recovery down at Dundrum House. That’s the level of co-operation and strategy and thinking that is going into the next step.
“These guys continuously send out statements and continuously look to improvement on the performances of the last day. I can’t offer enough words on how I feel now having witnessed what I saw in the second half.
“We tried to change things at half-time. We pulled our half-forward line out towards midfield, as there was just too much traffic. We re-positioned Cathal Malone, Podge and Peter [Duggan] back around the 65’ and tried not to make the middle third the battle field it was becoming.
“Duggan started winning ball and Cathal Malone was a revelation in the second half. It’s criminal to have to go up to him every night and say Cathal you haven’t made the team but he takes it so well. I’m thrilled that when he came in, he took his opportunity and he has asked us a serious question for the next day.”
O’Connor went on, “Aaron Cunningham has a serious hamstring injury but he has got time on his hands. We have to assess it.”
He agreed that Antrim’s win in the opening semi-final was “a bit of a surprise” but added, “This whole year has been a championship of surprises”.