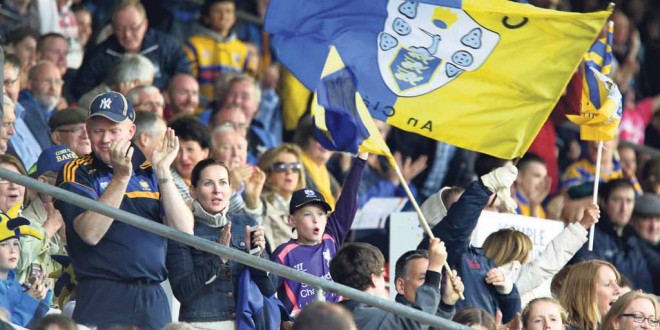 Clare fans are expected to turn out in force for the homecoming.Pic Arthur Ellis.

A BLISTERING start to the second half, which saw them score 1-5 in 10 minutes, paved the way for a comfortable Clare victory over Galway in the All-Ireland U-21 hurling semi-final at Thurles last Saturday evening.

Starting the second half just two points adrift, Galway held high hopes of dethroning the All-Ireland champions but Clare stepped up the pace and by the midpoint of the half, the holders were well on the way to a second successive final. The all-important goal came three minutes after the resumption and was scored by Cathal O’Connell, one of the stars in this latest victory for Clare. Indeed, such was Clare’s dominance in the second half that with 10 minutes remaining, they were able to call ashore senior star Podge Collins and then replaced two more members of the senior team, Colm Galvin and Tony Kelly, ahead of the upcoming senior final clash with Cork. An injury to Aaron Cunningham in the closing minute of the first half has cast serious doubt on the Wolfe Tones player’s chances of being fit for the senior and U-21 finals next month. As he raced up the left wing, he stopped suddenly with what has been described as a serious hamstring injury. Missed chances were the order of the day in a low-scoring first half, at the end of which the winners had registered eight wides, one more than their opponents. After the throw-in, both sides set up with two-man full-forward lines. The early exchanges were even, with the sides trading points twice. As the first quarter drew to a close, Galway full-forward Cathal Mannion, scorer of their first two points, was lucky to remain on the pitch following a tackle on David McInerney, which resulted in referee Diarmuid Kirwan issuing the first yellow card of the evening. Cathal O’Connell opened the scoring in the second minute and five minutes went by before Podge Collins had the winners’ second point. A brace from Davy O’Halloran early in the second quarter gave the Claremen a lead they held to the break, when the score stood at 0-5 to 0-3. Just before half-time, Cathal Malone was sent into the action in place of the injured Aaron Cunningham and Malone went on to have an excellent game. Galway had a goal chance early in the second half but corner-forward Jason Flynn saw his kicked effort go wide of the target. A minute later, the game took a major turn. Stephen O’Halloran, another of the leading lights on the evening, broke up the left wing before striking the ball goalwards. It broke from Shane O’Donnell into the path of O’Connell and he made no mistake. There was some controversy two minutes later when an O’Donnell effort was signalled as a point, when the ball was clearly wide. The ‘score’ still stood after the referee consulted with his umpires. Conor Cooney pulled one back for Galway but like scores from Cathal O’Connell, Podge Collins, Peter Duggan and Davy O’Halloran had Clare 1-10 to 0-4 up 10 minutes into the half and from here on, there really was no doubt as to the outcome. Cooney converted another free for the Tribesmen before his effort for a goal from a 30m free was saved by Ronan Taaffe. Two superb scores from Cathal Malone and another converted free by O’Connell pushed Clare 11 points clear. The game was over as a contest and the Clare management team replaced senior panellists in the next few minutes. It was fitting that Cathal O’Connell should have the final score when he converted a free in the 60th minute to bring his tally for the day to 1-6. The half-back trio of Alan O’Neill and his flankers, Seadna Morey and Stephen O’Halloran, dominated. David McInerney had another outstanding game, with team captain Paul Flanagan and Jack Browne also doing well, while up front Peter Duggan, Cathal O’Connell and Cathal Malone were particularly prominent.