Home » News » O’Callaghan’s election a surprise to many 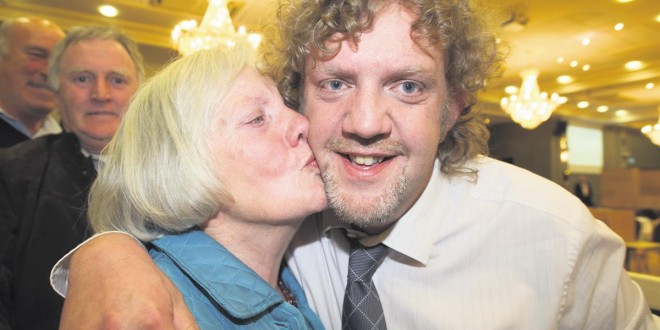 Fianna Fáil's Alan O'Callaghan is congratulated on his election by his mother, Breda.

O’Callaghan’s election a surprise to many

THE new six seat Killaloe Electoral Area has seen two changes to the current makeup with the election of one newcomer, Kilmurry man Alan O’Callaghan (FF), and the return of Killaloe’s Tony O’Brien (FF).

Alan O’Callaghan’s election came as a surprise to many as it was expected that former county councillor Colm Wiley’s son Liam Wiley would take the surplus Fianna Fáil vote in the region. However, the Kilmurry man netted 140 more first preference votes than Liam Wiley. Although both continued to climb the story was all but told when the majority of Niamh O’Brien’s (FN) votes were distributed in the fifth count to O’Callaghan. At this stage the Kilmurry man had 1,100 votes, and Liam Wiley had 958.

Commenting on his performance, newly elected Councillor O’Callaghan said, “I didnt think it would go on as long. It’s like a marathon, the longer you stay in it the better chance you have of making it. It’s relatively new to me the way the voting and transfers go on but I’m delighted. People came out. They trusted me and they voted for me. It was me they were voting for and I’m here now to represent them and I’m going to do that”.

Tony O’Brien (FF) has regained the seat he lost out on in 2009 and was extremely happy with 1,294 first preference votes in the county.

The memories of 2009 came back to Councillor O’Brien when his name was read out as elected and he said, “It’s a very, very lonely place to be when you’re short a few votes. I feel for the candidates who didn’t make it. I’ve tremendous respect for people who put their names forward to represent their communities”.

“I always felt I had a great chance, particularly with the support I got. I always believed that I could do it. I know what is involved and I know what it takes to represent my community. I’m very proud and very happy to put my name forward to do that. I look forward to doing that over the next five years and the work starts now,” he said.

Another unexpected outcome of the Killaloe poll was the performance of Fís Nua’s Niamh O’Brien from Tulla, who secured 731 first preference votes putting her in the eighth spot off the starting block.

The three others failing to make the cut were: Clare mayor Joe Arkins (FG) who lost out to Alan O’Callaghan; Liam Wiley (FF); and Donal Higgins (Lab).

Joe Cooney exceeded his poll topping performance of 2009 this time out with 2,843 first preference votes, compared with 2,780 votes five years ago.

Interestingly the majority of Joe Cooney’s (FG) surplus vote went to Fianna Fáil with 676 of the available 1,258 votes transferring across to the four Fianna Fáil candidates. His party colleague Pat Burke netted the most from his transfers gaining 294 votes, but Pat Hayes (FF) took nearly as many yielding 277 votes. Fine Gael’s Joe Arkins was expected to see some of these votes coming his way but instead just 96 votes transferred, which led to a fight between him and Alan O’Callaghan (FF) who were level at 1,019 votes in count six. The final result came in count seven, which saw O’Callaghan go ahead by 207 votes.

The outcome sees the tables turn politically in Killaloe, in line with the new Clare council chamber, with Fianna Fáil now holding the majority holding on three seats. The other half of the Killaloe electoral make-up sees a former Fianna Fáil member, now Independent and two sitting Fine Gael councillors re-elected.

The Labour vote went in the area following a poor showing from Donal Higgins, and the only sitting Labour councillor, Pascal Fitzgerald, failed to secure a seat in the Shannon Electoral area.