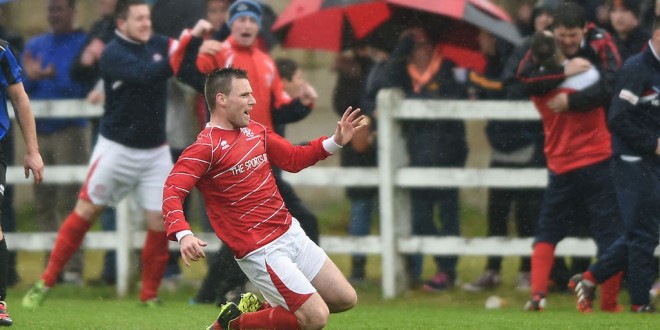 David McCarthy of Newmarket Celtic celebrates a goal against Bridge United during their cup final at Doora. Photograph by John Kelly.

The County Grounds in Doora is expected to attract one of its biggest attendances to date on Sunday when Clare champions, Newmarket Celtic, entertain Janesboro from Limerick in the final of the Munster Champions Cup.

The game will kick off at 2pm, with Michael Rock in charge, assisted by Trevor White and Terry Kennedy.

Janesboro are one of the strongest junior clubs in the region and are the favourites to win the title.

It’s been a great season to date for Newmarket Celtic, who are also still in the running for the Munster Junior Cup and FAI Junior Cup titles.

Janesboro, one of the oldest clubs in the Limerick league, will travel to Ennis with an experienced squad that includes the Clarke brothers, team captain Shane and Thomas, Shane Waters, John Boyle, Craig McMarlow and Stephen Walsh.

For Newmarket, central defenders Mark Donlon and Paddy Purcell are very experienced and they have been in outstanding form all season. Stephen Kelly is equally at home in midfield or in the centre of defence, while David McCarthy, Colin Smyth and Eoin Hayes are very skillful players that will trouble any opposition. Team captain Eoin O’Brien is another very experienced player, whose form has been key to a lot of the successes enjoyed by the club in recent times.

David O’Grady, Darren Cullinan, Seamus Lawlor, Alan Kelly, Alan Brigdale and goalkeeper Niall Quinn are all influential members of the squad that will have to be at their best if they are to make history and claim the Munster title.

Confidence is high in the Newmarket camp, which is is evident in their play so far this season. They have beaten some of the best teams in junior football in this region.
Janesboro manager Shane O’Hanlon said his side has serious designs on winning the Munster title but he stressed they are very much aware of the threat posed by Newmarket.

While Janesboro will carry the favourites’ tag, such is the form that Newmarket are showing, they must be given a great chance of capturing the honours.