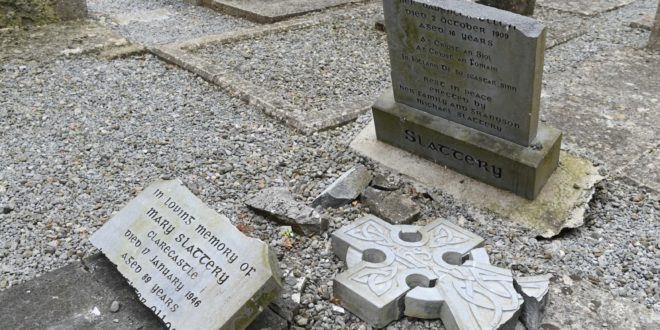 New taskforce to tackle desecration and damage at Clare Abbey

GRAVE desecration and damage alongside ongoing flytipping at one of Clare’s most historic sites has prompted the establishment of a new taskforce.
The Clare Abbey Taskforce are due meet for the first time next month and calls are being made for the installation of CCTV cameras at the national monument. A meeting of the Ennis Municipal District also heard this week that efforts are being made to have the Minister of State with responsibility for the Office of Public Works to visit Clare Abbey and hear first hand the concerns of locals.
Councillor Clare Colleran Molloy urged that the council convene the taskforce and adopt measures including CCTV to tackle flytipping which is “continuously being highlighted by the Clarecastle Tidy Towns” and “the ongoing risk of repeated damage and desecration to the graves located within the abbey”.
She called on the council to support Clarecastle Tidy Towns request for a “much more thorough” analysis of flytipping material found in Clareabbey to identify the culprits. These have included branded supermarket receipts, HSE details, prescriptions and school absentee forms. Remedial actions to repair and replace the damage to graves is also required. A number of medium and longterm actions have also been proposed. Councillor Pat Daly voiced his support for the new taskforce while Mayor of Ennis Councillor Paul Murphy stated that he has been in contact with Minister of State Patrick O’Donovan and is “hoping to get him out there to see the situation”.
It was confirmed the municipal district office will convene a meeting of the Clare Abbey Taskforce in early October and are contacting agencies seeking representation. The items raised by the council will be raised at the inaugural meeting.