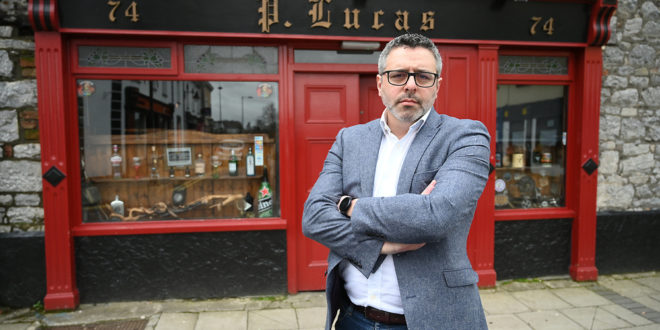 CLARE vintners are hopeful that enhanced powers for Gardaí to close pubs not complying with Covid-19 guidelines, will pave the way for the full reopening of their industry.

According to the Clare Chairperson of the Vintners Federation of Ireland (VFI), the forthcoming enforcement powers, which were discussed in the Dáil on Wednesday, are cause for optimism that all pubs might be allowed to re-open in compliance with public health guidelines.

“It’s only fair that those flouting the rules should be shut down,” said Darragh McAllister of Lucas’s Bar and Considines in Ennis. “What we are hoping is that tighter rules might allow those of us who run wet pubs to open. In the VFI, we have been seeking these powers from the very beginning because we see them as an indication that all pubs will be given the chance to open and operate responsibly.”

Mr McAllister denied that the differential treatment of food pubs, which re-opened in June, had created tensions between publicans. “There are pubs who rightly grasped every opportunity to open their doors,” he said. “Nobody could fault them for trying to keep the lights on and the doors open. We are all singing from the same hymn sheet and, if all pubs are allowed to open and operate according to the same rules, it’ll be a great relief. Not just to publicans, but to the public who may not all want to be paying €9 for food every time they want to have a pint or two.”

Mr McAllister insisted that the vast majority of publicans are highly responsible and open to working with law enforcement authorities. “Of almost any sector, we have a huge amount of interaction with the Gardaí,” he said. “Pulling a pint is something that is almost as highly regulated as making children’s medicine. We have a great relationship with Gardaí and the overwhelming majority of people in the trade want to work with them.”

Mr McAllister added that he was confident that people would be able to socialise responsibly in the event of the full re-opening of pubs.

“People are mad to get out and socialise,” he said. “They are looking for the opportunity to do that in a responsible way and it makes more sense for people to be in an environment where social distancing can happen and where there are guidelines in place.”

Mr McAllister’s view was echoed in Bodyke, by the proprietors of The Cobbler’s Rest, which has remained closed since March. Martin Butler and Susan McMahon described their premises as a focal point for local people and said its ongoing closure was a huge loss to the community.

“We deserve a chance to open,” said Mr Butler. “If the government want to make the rules stricter and give more power to the Gardaí, that’s fine. We’ll keep the rules. I feel so angry that I haven’t been afforded a chance by this government or the previous one. We just want a chance.”

Politically, Deputy Michael McNamara, who is chairperson of the Dáil Special Committee on Covid-19 Response, was critical of the ongoing closure of over 3,000 wet pubs nationally. “The pubs are open in every other European country,” he noted, “yet our infection rates are rising. Clearly, something is not working in our approach and people need to live their lives.”

Meanwhile, the Licensed Vintners Association (LVA) said this week that thousands of publicans face defaulting on their mortgages unless action is taken. While the government has announced a €16 million rescue package for pubs, the response from the trade has been lukewarm.

On Wednesday, Minister for Justice Helen McEntee described the new powers as part of a road map to re-open all pubs, subject to strict Covid-19 guidelines.

Fiona McGarry joined The Clare Champion as a reporter after a four-year stint as producer of Morning Focus on Clare FM. Prior to that she worked for various radio, print and online titles, including Newstalk, Maximum Media and The Tuam Herald. Fiona’s media career began in her native Mayo when she joined Midwest Radio. She is the maker of a number of radio documentaries, funded by the Broadcasting Authority of Ireland (BAI). She has also availed of the Simon Cumbers Media Fund to report on development issues supported by Irish Aid in Haiti. She won a Justice Media Award for a short radio series on the work of Bedford Row Project, which supports prisoners and families in the Mid-West. Fiona also teaches on the Journalism programmes at NUI Galway. If you have a story and would like to get in touch with Fiona you can email her at fmcgarry@clarechampion.ie or telephone 065 6864146.
Previous Gardaí urge smartphone users to be ‘Streetwise’
Next New taskforce to tackle desecration and damage at Clare Abbey