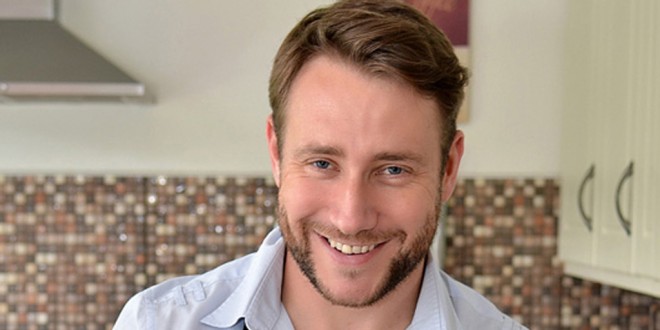 IN 2008 Paul Callaghan ran a successful plastering company, often having to turn down work in the height of the Celtic Tiger. But that all changed when the recession hit and he was forced to close his business, eventually leading to him suffering depression.

However, Paul, who lives in Barntick has turned his life around through cookery and he has launched his first book, Calso Cooks:Real Food Made Easy which is getting nationwide attention.

The 34 year old who is originally from Armagh moved to Clare after making the tough decision to wind down his plastering business. “Work had been flooding in in the boom, but in 2008 around March the phone stopped ringing so I wound down the business. My sister lives in Kildysart so I was used to the area visiting her. I thought a fresh start and change of scenery would be good and I decided to move down here and do any kind of odd jobs to pay the rent But I fell into depression, and for 18 months I was in a very bad depression with the business going, all the money going out and nothing coming in.”

A fan of shows such as the River Cottage and Jimmy’s Farm, Paul decided to check out growing your own with the help of books borrowed from the DeValera Library. He began with a small plot in 2010, and he credits getting out into the garden with helping him deal with depression. “It definitely pulled me out of the depths. I’d recommend it to anybody. It helps you to know your not stuck in a rut. There was no point in me sitting on my ass at home, going I’m a plasterer and there is no work. You can always find something you are interested in and develop it.”

Through growing his own vegetables and herbs, Paul went on to start experimenting with cooking. “I started getting books and reading recipes, twisting them to me own taste then after a while I realised I had about 70 or 80 recipes on file. Because I live in Clare now and most of my family and friends are up above I thought it would be a good idea to let them see what I was doing, so I started the Sustainable Larder blog. Next thing, I was started getting hits from all over the world and I’ve been blogging since.”

He tells us that he did very little cooking before this. “There was never a life long passion for cooking. I came from living with my mother and father and I was the youngest of nine, they were good cooks but they cooked to feed the troops not to tantalise the tastebuds.”

It was a chance meeting with a fellow food blogger which led to his book deal with Mercier. Paul had taken on a challenge to raise awareness of depression, running a half marathon in every county in Ireland over 12 days in support of Aware.

“I was in Cork when I was talking to another food blogger who had a book with Mercier, she put me in touch with them and within two weeks I had put in a proposal and they met me in Ennis to sign a contract.”

Starting the book on January 1, 2013 he finished it within a few months, even doing the photography himself. The book is now on general release in bookshops nationwide, with Paul appearing television since the release.
In fact, the first time he saw the book on the shelves was while in Dublin to appear on television. “The first time it really hit home about what I had done, and am doing, was when myself and my girlfriend were in Dublin. I had interviews for RTÉ and TV3 and we went into one of the bookshops. It was the first time I saw the book on the shelf, my girlfriend said I just turned white.”

He describes the book as “five years in the making.” “From when I started the blog I sort of had the idea that I would love to write a cook book at some stage, but it was always 90% of me saying ‘who would be interested in that?’ and the other 10% of me saying ‘why not you?’. And I’m glad I stuck with the 10%. It was five years in the making of not earning anything from doing this, but not its starting to progress into a career.”

He says his cookery style is “good honest cooking”. “The book is based on a good balanced diet, everything in moderation. When I was making the book I was clean broke, so I was making recipes I could afford so there is nothing too extravagant in it.”

Paul’s depression continues to be a part of his life, though he is taking steps to tackle it. “It’s still on and off, and I’m taking medication. You have have your good days and bad days, but if I have to battle with it the rest of my life I will. If I have to take one tablet a day for the rest of my life, so what?”

He is now looking to the future, and is already hoping to have a second book. “I’ve also some things in the pipe line, I’ve had interest from different food companies around Ireland.”
Paul will be doing a demonstration in the Ennis Book Shop on Saturday at 11am.