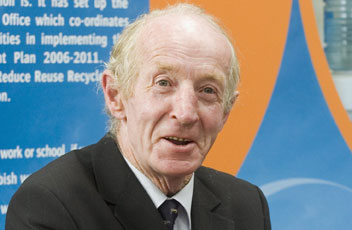 Councillor PJ Kelly has called on the government to reverse its cutbacks on Leader funding.

LEADER funding will be down by €105 million over the next five years, according to Councillor PJ Kelly, while CEDRA funding will be worth just 34 cent a year to every person in Clare.

Councillor Kelly was calling on the Government to reverse its cutbacks to Leader funding at the adjourned April meeting of Clare County Council and said he was extremely disappointed in the reduction of funding, following a huge level of expectation throughout the country.

“The money involved here is EU money, of which the Government only pays 37%,” he said. “In the previous programme we had €352m and because of costs rising over the past five years, we could have expected at least €100m more. Instead, it was cut back by €105m. We were given the impression that we would get €250m, until we actually looked at the small print. It said co-operation projects around the border, €10m; artisan foods, €15m – two in Ireland; CEDRA, €5m for the country over five years: €1m every year divided by 28 regions, €35,714, which works out at 34 cents for every man, woman and child in Clare.

“If we win the All-Ireland this year – and I hope we do – it won’t pay for the reception in the Fair Green,” he said.

Taking off the €30m from €250m leaves €220m, he said, allowing that the money they’re taking away should be coming out of another fund.

During the last Leader programme there was €16.2m in Clare, this time there is €8.9m, a reduction of 45%, Councillor Kelly said.

“Great work was done in the county. There’s no doubt that Leader did lead,” he said, telling the meeting that in the ’70s, ’80s and ’90s, the funding was tied into the people, the county’s greatest resource.

“Communities got together and a survey done at the time indicated that for every IR£1 the council gave, IR£5 was raised in the local community.

“The new programme has an emphasis on flagship projects. We’re going to put grass over the West Clare railway so you can walk on it. I’ve no problem with that but that is being done at the expense of social funding,” Councillor Kelly said.

Councillor Tom McNamara said Clare has taken one of the biggest hits nationally in Leader funding, which had served the communities well.

“It has been distributed very well over the last five years and several communities have benefited greatly. I would hope it will continue like that for the next five years but with the amount of funding, I can’t see anything like the same amount of work being done. The minister should reconsider and back this fund to the hilt. It’s the only way communities will be sustained,” Councillor McNamara said.

Councillor Pat Hayes said while Clare was hit with a 45% reduction in funding, Cavan was given a 66% increase and Limerick a 1.4% reduction.

He said Clare had already subsidised many counties with its property tax but this was done with rural development funding, which was always intended to support rural communities and noted that the Leader scheme is now being extended into towns, including the covered market for Ennis, which will have its own impact on diluting the funding.

Councillor Johnny Flynn said he supported the call for Leader funding cuts to be reversed and said the covered market was not funded by Leader and neither was the Greenway project, which began from Ennistymon to Lahinch recently, mentioned by Councillor Kelly earlier in the meeting.

Councillor James Breen said the cut in funding is an attack on the fabric of rural Ireland and another attack on the rural heart of the country, while Councillor Christy Curtin said the Leader scheme had always been there for community development over the past decade and was always intended for the periphery of the county.

He said that only two weeks ago, President Michael D Hillery was in Miltown Malbay to open a water safety centre, a partnership model between Leader and Clare County Council.

“We work with the little money we have and as far as I’m concerned for the past number of years, Leader has been the only show in town,” Councillor Curtin said.

He added that the members of the council who are on the CEDRA team will deliver the best that they can for the county.

There was also a question of who would be deciding on Leader funding and it emerged that the recently established 19-member CLDC, four of whom are councillors, was considering an expression of interest in this. The councillors are to be fully briefed on this by the CEO.