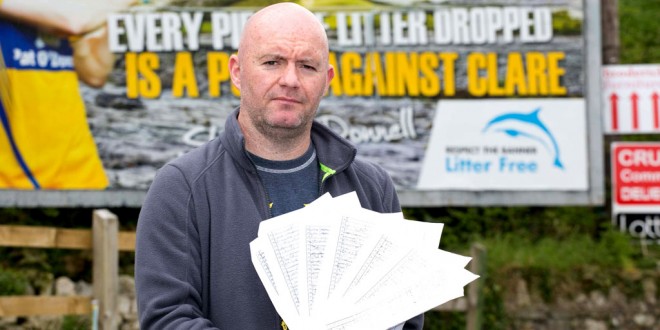 A Crusheen man has gathered approximately 300 signatures to get a billboard on the southern outskirts of the village removed.

Michael Hickey believes the billboard at the railway bridge is no longer relevant and that it is having a negative impact on the look of the village.

“I was moved to start the petition after passing the billboard on foot with my kids and seeing the torn pieces of posters strewn all over the briars and gathered behind the stone wall at the foot of the billboard,” he said.
The poster currently on the billboard is one advertising Clare County Council’s own ‘Respect the Banner’ anti-litter campaign.

“It is a joke at the moment because there is an anti-litter poster on the billboard and there are lumps of torn poster up in the briars,” Mr Hickey added.

A spokesperson for Clare County Council stated that a person had contacted the local authority in February regarding the billboard.

“Their concern related to littering in the vicinity of the billboard. The council’s Environmental Patrol Warden immediately visited the site and identified a small amount of littering at the location. The litter was removed at that time,” he said, adding, that “currently, there is no littering at the site in question”.

“It is most unfortunate that this complaint has arisen in the context of Clare County Council’s Respect The Banner campaign,” the statement from the council continued.

The council also claims it cannot have a structure removed after planning permission has been granted.
“In this case, the council doesn’t have a record of any planning permission being granted but the billboard may be in place for a considerable number of years and, at this point, be outside the scope for planning enforcement,” it noted.

The aim of the petition is to have the billboard removed. It states that it is “out of its element given its rural surroundings. It is of no benefit to the people or village of Crusheen. It harms any efforts made by the people of Crusheen to beautify our village. And for these and many more reasons we request it be removed”.

“The people of the village no longer want the large advertising billboard by the railway bridge,” Mr Hickey said, “I’ve had a very supportive response and have at least one name from nearly every house in the area.”

“I understand that it was a prime location to have a billboard when Crusheen was on the main road between Ennis and Gort but now it is the same three or four hundred people seeing it every day,” he concluded.