Home » News » “He helped a lot of people in quiet ways” 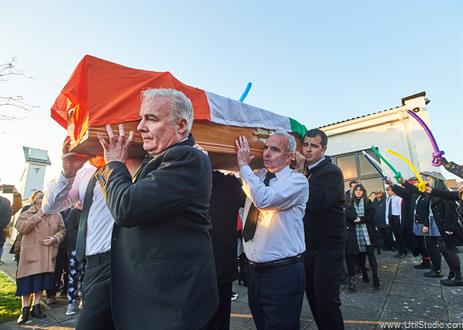 “He helped a lot of people in quiet ways”

Ss John & Paul Church was packed for the ceremony, while large numbers had also attended the McKee house on Saturday as the remains were reposed.

“I and many more of you knew Mike McKee as a man of courage, of kindness, honesty and fairness. I and many more, while not always agreeing with Mike, held him in the highest esteem and respect as a family man, and as someone who had a mandate to represent our community. Mike represented this community, this town, without fear or favour for over 30 years.”

Addressing Councillor McKee’s wife, he said, “Eileen, I know there are many people thinking of you and your family this afternoon and many who are very grateful for what Mike and your family have done, and while today is your personal loss, it’s also a huge loss to our community.

“I saw Mike’s best trait as self-giving for another, to Eileen, Jeanette and David, his family. But that also shone through his business of entertainment in Video World, Home Entertainment and HT Promotions where Mike, his family and his team brought so much joy to others.

“Even as recently as yesterday the family fulfilled engagements for families and parties rather than letting people down. I know that is what Mike would have wanted.

“As Queen once penned in their lyrics, and one of the final few words of Mike to his family, ‘the show must go on’.”

Referring to Councillor McKee’s record of repeatedly winning seats whenever he stood for election, Fr Rosney said, “That’s some feat. You don’t achieve that by doing nothing, and sweet talking people.

“That’s achieved through hard work, fighting for fairness, and doing your best for those you serve.

“That’s what really shone through this past while and one of the common lines was that Mike was a ‘good man’. Councillor Mike McKee worked hard for Shannon, he helped a lot of people in quiet ways, there are very many people indebted to him and we thank him for his service to this town.”

His daughter Jeanette paid tribute to her father. “Dad was an exceptional man to us all. He looked after myself, my brother David and my Mum the very best he could.

“He made sure we had everything we ever needed, whether it was food in the fridge, the latest movie to come out on rental to Video World, that often never went back if we did like it, to having bouncy castles to jump on all day from HT Promotions, the list was endless.

“He was the first man I loved and I was definitely a Daddy’s girl.”

Owen Ryan has been a journalist with the Clare Champion since 2007, having previously worked for a number of other regional titles in Limerick, Galway and Cork.
Previous Huge crowd attends Newmarket public meeting
Next Lohan Looking Forward To Getting Managerial Tenure Underway