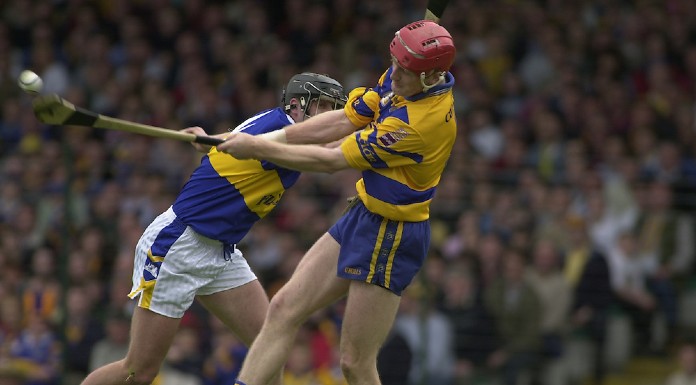 Brian Lohan’s first outing as Clare senior hurling manager comes this weekend when they take on Galway in a challenge game in Ballinderreen on Saturday afternoon.

The two-time All-Ireland winning defender was officially ratified at the October meeting of Clare GAA for an initial two-year term with a third season on offer pending a review.

It ended months of speculation as to the future of the Clare senior hurling management with a turbulent process eventually coming to a conclusion with the four-time All-Star’s appointment.

Early season training is now well underway, with a large training panel being cut down for the upcoming Munster league and National league. There are two outings for the new set-up in the next week, with Saturday’s clash with Galway being followed on Sunday December 15 with a showdown against All-Ireland champions Tipperary in Nenagh for the opening round of the Munster league.

Lohan spoke to The Clare Champion to reflect on his first few weeks in charge along with addressing some of the main talking points surrounding his appointment.

ISSUES WITH COUNTY BOARD

The Wolfe Tones man has been a vocal critic of Clare County Board in the past, including as recent of May this year when he said he felt the clubs were being let down by the board. He admits those concerns were something that he thought about before opting to make his bid for the role, but is confident that it is not something that will hinder progress on the field.

“It was something I took in account. You have to take it all into account when you go into a job like that because it is a big commitment and if you thought it was going to affect the team or going to affect the performance of the team over the next year or two, you would be thinking twice about it. There has been a good lot of dialogue between me and my management team and the county board, and if I thought the issues that were there were going to affect the team, or if I could not improve the team, I would not be in the role. I did take all those things into account and I am in the job now. I was happy that once I made the decision to go for it, I was going to really go for it. If I got the opinion or if it came back to me that the clubs or players didn’t want me, I would have pulled out. That was not the case so I was happy to take it on. Without ever being too vocal about it, I would have always been interested in the role. It never really came across my radar and then about two or three months ago it looked like there was going to be an opening there. I said if it came up, I would go for it” he said.

It is Lohan’s first senior intercounty appointment but he has managerial silverware on his CV after guiding UL to the Fitzgibbon Cup. Two of his management team from that victory are part of his new backroom team, and he is confident the team they have assembled will each bring their own quality to the squad.

He said: “Ken Ralph and James Moran have been with me in UL and we had a relatively successful spell in looking after the Fitzgibbon team. If I was going in as manager of the team, I was always going to bring them with me, if they were willing to come which they were. James has hurled for over ten years with Limerick and Ken is well known in Clare GAA circles having hurled with Clarecastle for years and would be well regarded in Clare. He was involved with a lot of these lads in development squads at U-14 and U-16 level. They are the two selectors with me and then we asked Seán Treacy to get involved. He was with Kildangan in the Tipperary championship and would have a great track record at all levels as a hurling coach. Keith Carr is our strength and conditioning coach and he has his team with him that look after that aspect. He has a great track record at intercounty also, maybe not so much in hurling but would have been involved with the Galway senior footballers along with Roscommon and Westmeath too. Niall Romer is our kitman and he is very enthusiastic and he is a great guy to have around the panel and the team so he is going well too”.

In the aftermath of Donal Moloney and Gerry O’Connor’s departure, the realisation of the funding shortfall carried by their fundraising group Club Clare began to dawn. The group was responsible for raising somewhere in the region of €350,000 during its three years in existence, with Moloney and O’Connor instrumental in its foundation. Lohan outlined that while further developments by counties like Tipperary are difficult to match, there is some good news in relation to the funding of his panel.

“The whole funding element is huge. Most people would have seen what happened in Tipperary last year. Teneo came in with a big package, a massive package, and then they came in with the promise of fundraising and additional amounts. There are figures mentioned of €250,000 up to €350,000 which is massive money. There is no doubt but that intercounty teams and intercounty management set-ups are expensive. You just have to look at Liam Sheedy’s backroom set up last year where there was something like 29 people involved in it. We can’t afford to have 29 people so we are going to have to double up on roles that are there. Liam Sheedy might have had three hurling coaches but we don’t have the resources for that so we have one hurling coach and that’s it. It’s the same in relation to strength and conditioning, the whole psychology side of it, the GPS systems, video analysis, performance analysis and all those type of things. They are all add-ons, but what it means is that the team we have there with the likes of James, Ken, Seán and myself, it means that we are going to have to double up on those kind of roles because we just simply don’t have the resources. That being said, John Kerin in Club Clare is staying on for another year which is a real boost for the hurling side of Clare GAA. There is a committee put in place there that is going to be working not just for the senior team but for all aspects of hurling in Clare and it is great that John is there. He has worked brilliantly over the last three years and the money him and his committee have raised is exceptional and he has committed for another year which is a great boost for the set-up” he revealed.

Lohan’s first task will be to revitalise a group who are coming off the back of a difficult 2019 campaign. He is confident that the talent is there to get back to the top.

“There are some exceptional players there and going back over the last couple of years they have been exceptional. For the last five or six years they are the only group of players we have had to win as much as they have between their minor successes, at U-21, and even at Fitzgibbon level a lot of the players would be well decorated. There is that bit of potential there and it is a case of us going in there now and trying to get a team together and trying to get the best out of the players that we have. The game and people’s opinions are very fickle. Once you have a bad performance or two, you begin to scratch your head and wonder where our good lads are and what has happened to them. I would have good faith in the team and good faith in the individuals that are there and I am quite happy to take on this bunch. Most people would know what is there in places like Tipperary or Limerick or Cork but I am happy with the lads we have” he noted.

The protracted saga that followed Clare’s championship exit led to a significant delay in plans being finalised for the 2020 season. With the new set-up now having almost four weeks work under their belts, the manager is confident they can continue to strive for success.

“We started off with the panel of 38 players who were there last year and we brought in about another 12 with that. Obviously we have lost out on a couple of lads and there are a few injuries there too. Peter Duggan being gone to Australia is a big loss to the panel but you never know, he could be back. We were conscious of giving lads the opportunity to represent their county if they were good enough and since we started, the commitment has been excellent. The county has a great bunch of guys there and they want to improve, they want to learn and they want do the best for their county. Everyone realises that there is a huge amount of hard work to be done and I think everyone knows this is the start of that process and we have to work towards that. It has to start at some stage and we might be a little late in making that start, but we are underway now so we have to tear into it. The championship is the main goal and everything you are doing is preparation for that. At the same time, you don’t have a huge amount of matches so if you are in the shop window, you want to be performing as best as you possibly can for all the games, whether that be Munster league, National league or championship. We have a challenge game against Galway in Ballinderren this Saturday and then we are down to Nenagh to play Tipperary in the Munster league which is a great opportunity for everyone. It will be great to get out and have a cut at the All-Ireland champions. The aim is to try and look at everyone. We have had a number of training matches between ourselves and that was great to have. You can pick up things from that but you can’t beat competitive games to see show players perform so it will be interesting to see how they do and being up against Tipperary, we should get a good mark of where we are at” he concluded.