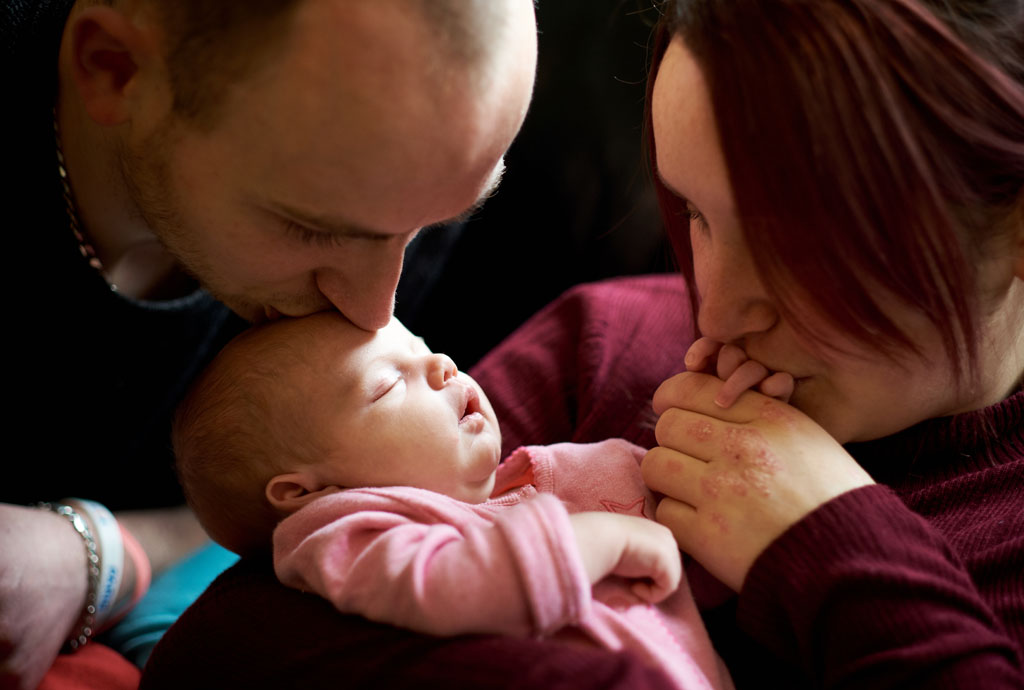 Baby Holly with her mum Amanda Carmody and Michael Coughlin at home in Ennis. Photograph by John Kelly.

THE parents of a newborn baby who received emergency intervention at Ennis Garda Station last week have told The Clare Champion that they want the gardaí to know how “eternally grateful” they are.

As Amanda Carmody and Michael Coughlin sit comfortably in their living room, watching their 17-day-old baby Holly sleep soundly in their arms, they say Garda Ken Butler and Garda Patrick McCormack “were absolutely incredible”, when they arrived into the station on Wednesday evening last.

She explained that the couple had been in town with Holly on Wednesday last and were walking out Newbridge Road in Lifford, having come over the Club Bridge from town, when they noticed something wasn’t right.

“We were just down by where MT Pockets used to be and we heard this little screech from the buggy. We looked in and Holly’s nasal passages were all clogged with, like, clotted milk or formula. She wasn’t really frothing at the mouth but there was really thick, syrupy saliva. We took her out and she was gasping for air,” Amanda outlined.

She explained that what really frightened them was that the baby stiffened when she was lifted out of the buggy.

“Once I took her out, she just went stiff. She went red and purple in the face and blue around her mouth and stopped breathing. We turned her on her stomach and started patting her on the back. She did let out a bit of a screech so she was breathing again at this point but she was struggling for breath.

“Then Michael said, ‘let’s run to the garda station’, so he ran ahead of me and told them we were coming and our baby wasn’t breathing,” Amanda said.

Michael explained why he decided bringing her to the garda station was the best thing they could do in that moment.

“She was struggling and she went stiff and I was going to ring for an ambulance but then I spotted the garda station and I thought, well, they are an emergency service, we might as well run there first and, if they can’t help, they can probably get an ambulance quicker than we could if we rang ourselves,” he said.

They described the efforts of the gardaí on duty that day as “fantastic” and spoke highly of efforts made by Garda Ken Butler, who kept them calm while administering assistance to their then nine-day-old baby.

“Garda Ken Butler took Holly from me. At this stage, I was holding her face down, patting her back, trying to free her airways. He was fantastic, he was so calm. He talked us through everything he was going to do, and that he was going to do the baby Heimlich or back slaps. He had Holly and he was hitting her on the back and then he had a little oxygen tube and he was holding it in front of her face. He told us what he was hoping for was to hear her cry and that a noisy baby was a happy baby. He did another pattern of back slaps and, at that point, Holly started to cry. The whole thing took about 20 minutes from the time we arrived in the buggy. He was very reassuring and everyone was great,” Amanda said.

Garda Patrick McCormack, from Ballinasloe, who is a recent graduate from the Garda College and has been stationed at Ennis for the past four months, was among those tending to the couple and Holly. He said, “I was never as glad to hear a baby cry before.”

Holly’s parents said they are delighted to report that their baby girl is doing very well again and that she is absolutely “perfect”. They said Holly was kept in hospital for three nights as a precaution but that all tests came back clear and she was given a clean bill of health.

“Holly was a section baby and the hospital reckons that it was probably a mucus block [that caused her breathing difficulty], which is quite common. They can’t guarantee that was what it was but all the tests were clear,” Amanda continued.

She explained that when the ambulance arrived, Holly was doing ok.

“I was just changing her nappy and her colour was starting to come back. She was very shook. By the time we got in the ambulance, she was just so knackered, she slept the whole way. She’s perfect again. We just want to thank everyone for what they did. They didn’t say what would have happened without that intervention but, if it wasn’t cleared and if she was deprived of oxygen [it wouldn’t have been good]. They didn’t tell us because we had been through enough,” she said.

It turned out very lucky for Holly that Red Cross volunteer Garda Ken Butler hadn’t clocked off duty on the day.

Garda Butler said, “I was in the office and Garda McCormack’s sergeant, Mark, who knew my qualifications, came and got me and told me that a baby had presented to the public office and was choking. I went over and Michael and Amanda were at the public counter with Holly. She was breathing but she was coughing and spluttering and having difficulties. I took Holly and I had to do a few back blows to help clear the airways and she came back a better colour and had better breathing, so there was a bit of manual clearance of the area and then I gave her a bit of oxygen and monitored her,” he said.

He explained that he was the only one in the garda station to have oxygen and he had it because of his expertise. He added that, if they had come into the station any later, he might not have been there.

“I was just in the office, finishing paperwork. I’d say 10 minutes later, I wouldn’t have been there, I’d have been gone home,” he said.

Another positive to come from the experience was that other gardaí are looking to access medical training, in the event that this type of situation happens again.
“A couple of lads have mentioned it to me, where I did my training and where they could do it, so it might have made a few people think,” he said.

Although Garda Butler, who is originally from Murroe, County Limerick, has been a member of the Red Cross since before he joined the gardaí, he said this is the first time he has used his training to help a baby. He said he has had to administer life-saving efforts to adults before but never a baby.

The family and gardaí have also praised the emergency services personnel who arrived and took over Holly’s care.