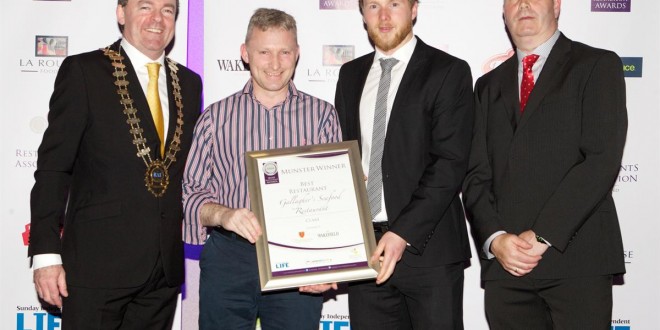 GALLAGHER’S of Bunratty is Clare’s best restaurant but Gregans Castle in Ballyvaughan and Dromoland Castle took two awards each at the Munster Regional Final of the 2014 Irish Restaurant Awards.

Over 400 restaurant owners and staff celebrated their hard work and achievements at the Awards held in Limerick on Tuesday, which saw many well-known Munster restauranteurs turn out to see if they had won one of the prestigious awards.
Gallagher’s Seafood Restaurant in Bunratty was named Clare’s best restaurant but best chef in the county went to David Hurley of The Dining Room at Gregans Castle Hotel, a venue which was also named best hotel restaurant in Clare.

The best casual dining award also went to Ballyvaughan, this time to L’Arco Italian Restaurant. Vaughan’s Anchor Inn in Liscannor was named Clare’s best gastro pub. The best wine experience was deemed to have been at the Earl of Thomond in Dromoland Castle Hotel, which also received an award for best customer service.
Speaking at the awards, Chief Executive of the Restaurants Association of Ireland Adrian Cummins said; “The Irish Restaurant Awards celebrate their sixth year this year and have become the Island’s biggest food awards. The credibility that these awards have is reflected in the amount of nominations they received this year – 19,000 nominations were cast across nine categories, showing that these are the awards that everyone wants to win.

“The Irish restaurant scene is internationally recognised for its high calibre of restaurateurs and chefs. These awards celebrate the people that make the restaurant sector the dynamic and exciting industry it is. They are the people who provide 64,000 jobs to our economy and generate revenue in excess of €2 billion. We’re recognising the talent, hard work and commitment that everyone here gives to the food industry.”
All County winners now compete for the Regional and All Ireland Title which will be announced at the Irish Restaurant Awards in on Monday, June 9. The awards are held in association with Sunday Independent LIFE Magazine.