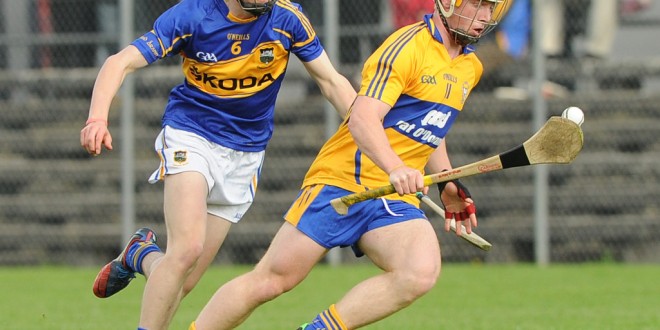 Michael O Shea of Clare in action against Stephen Quirke of Tipperary during their Munster Minor Championship game at Cusack Park. Photograph by John Kelly.

THE Clare minor hurlers qualified for a Munster semi-final meeting away to All-Ireland champions Waterford on June 25 or 26, following an incident-packed second play-off game in Cusack Park on Wednesday evening.

The crowd of 1,218 witnessed three straight red cards, issued to Tipperary players Tommy Nolan, Willie Connors and substitute Chris McCullagh.
The latter reds were deserved but Nolan was very unlucky to be sent off, following an incident with Clare goalkeeper Jason Loughnane. He was red-carded in first half injury time after he caught Loughnane with the hurley but a yellow card would have sufficed.

Earlier in the half match, referee Nathan Wall had issued four yellow cards, two to each team, when none of the players seemed deserving of them.
Tipperary led 0-10 to 0-9 at half-time, having played with the breeze. It’s a measure of Clare’s second half superiority that their opponents scored a mere 0-2 in the half hour of hurling that followed, while Clare tagged on 1-13.

Full-forward Aaron Shanagher was in superb form from frees, while he also buried a 51st minute penalty, won by Stephen Conway, after which Connors was red-carded.

Elsewhere, Brian Guilfoyle, Ian Galvin and Colin Corbett put over some nice points, while Michael O’Malley got through a lot of good hurling in midfield.
Tipperary’s Stephen Quirke fired over four superb first half points from play, while Alan Tynan was steady on the frees during that opening half.

“I expected it to be a lot closer than what it was,” Clare manager Eamon Fennessy said as his team warmed down. “We’d seen Tipperary in different challenges during the year and we expected a much tighter game than that. The man being sent off, before half-time, seemed to unsettle them,” he added.

Fennessy feels the two extra games against Kerry and Tipperary, following Clare’s home defeat to Waterford in their opening game, will bring them on.

“It is great for this group because they’re a new bunch. Each game is going to bring them on and tonight we were ready for it,” he stated, adding that Clare had not done well in the opening half.

“We weren’t hurling well but, at the same time, we were sticking to our plan and to our puck out strategy,” the Clare manager noted.