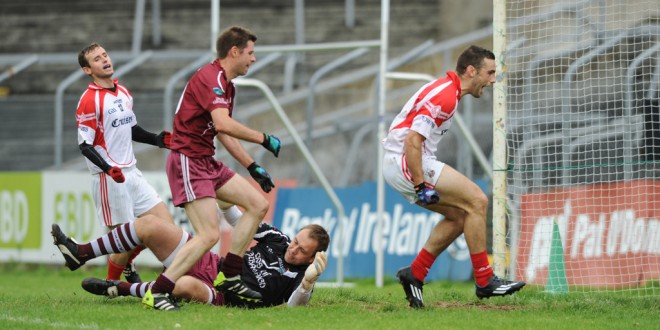 The line up for the quarter finals of the Clare senior football championship was completed this weekend and the last eight games are scheduled for the weekend of September 5, 6 and 7.

Eire Og went into their game on Sunday with Lissycasey as favourites to progress and while the justified that favouritism, few would have predicted the size of their winning margin.

The townies recorded a runaway 3-16 to 0-6 win and were well on their way to a quarter final date with Miltown before the mid point of the game had been reached.

First half goals form Eoin Glynn and Stephen Hickey helped the winners to a 2-12 to 0-1 lead. While the second half was closer, Eire Og continued to dictate matters and Dean Ryan struck for their third goal with ten minutes remaining.

On Saturday evening, Cooraclare had progressed to the last eight with an easy 2-13 to 1-3 win over Ennistymon.

On Sunday evening in Kilmihil, extra time was required before O’Currys accounted for St. Josephs, Doora-Barefield to progress to the last eight. The Doora-Barefield men led 0-7 to 0-4 at the end of the opening half and the lead changed handed on a few occasions in the second half before the teams ended level at 1-10 for the West Clare side to 0-13. They took a two point lead at the end of the first period of extra time and held that all the way to the final whistle when the scoreline was 2-12 to 0-16.

The remaining third round game saw St.Senans Kilkee up against Kilmurry-Ibrickane. These sides met in the opening round when the seasiders caused a huge shock when recording a one point win. They again made things difficult for Kilmurry-Ibrickane this time out and, for a while, extra time looked likely. Kilmurry held a one point advantage at half time, 0-9 to 1-5. At the three quarter stage the teams were level but Kilmurry’s superior fitness told in the final quarter and they ran out winners on a final scoreline of 0-16 to 1-9. Both teams had two players black carded in this tie.

Meanwhile, the race for the intermediate championship is down to five teams. Wolfe Tones have topped their group following their third win from as many outings. They beat Eire Og but the town side have secured second spot by virtue of a better score difference over Clarecastle and Kilfenora.

A three way play off is required to determine the two qualifiers from the other group. Corofin defeated Kilmihil and both have finished with four points along with Kildysart. The fact that Kildysart received a walkover from Kilmurry-Ibrickane means that score difference cannot be used to decide placings so a three way play off will take place with two to qualify for the semi-finals.