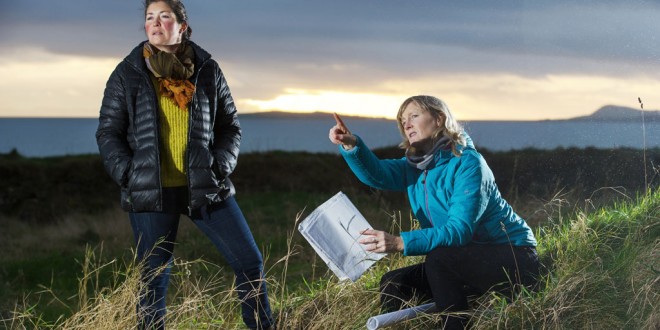 Frances Bermingham and Trea Heapes who have completed an audit on the heritage of the Loop Head peninsula. Photograph by John Kelly.

AT last week’s launch of the Loop Head Heritage Trail, Trea Heapes and Frances Bermingham unveiled details of their heritage audit of the three parishes that primarily make up the Loop Head Peninsula.

Working in conjunction with the Heritage Council, they have come up with an 872-item inventory for the parishes of Kilkee, Carrigaholt and Kilballyowen.

This audit was separate but complements the Loop Head Heritage Trail, which includes 18 attractions on the peninsula. Both will be used to help tourists experience Loop Head in some detail.

“It’s an inventory of all items of heritage on the Loop Head Peninsula. You’re talking about nearly 90 townlands. In some townlands there isn’t even a house in it. That’s from Baltard, west of Doonbeg, down through Tullaher Bog, to Poulnasherry Bay and then west to Loop Head. There was mainly three parishes in the audit – Carrigaholt, Kilballyowen and Kilkee. About 400 odd of the 872 are recorded monuments,” Trea Heapes explained.
Prior to carrying out the audit, Trea and Frances received some training.

“We did heritage training with Zena Hoctor. We had worked with Zena before, she had been involved in a project with the Marine Institute. They looked at maritime tourism and they used Loop Head as a pilot. Congella Maguire (Clare County Council Heritage Officer) has been the key to all of this. She would send us on the odd email to see would a particular project interest us. She sent us a Learning From The Landscape email, which was training put in place by Zena for Lough Derg. Three counties came together there to produce the Lough Derg Heritage Trail,” Trea noted.

She said the training was hugely beneficial. “Learning From The Landscape was very attractive in that you can go along, look and tell the story of your area by some key factors, like knowing a bit about the history of the area and knowing where to look for things. We went out with Zena on field trips and she said things like ‘look at that mound there. I bet you it’s a ring fort’. It was just fascinating,” Trea said of the 12 weeks of training, which included neolithic items.

“That’s the idea of an audit. When you do it, then you can categorise it, prioritise and see what you want to do with it. You can come up with themes like walking, cycling and educational trips for example. We split up the peninsula into 17 study areas. A study area is a geographical area that we knew we could look at in a half day. Our very first point was the top of Corbally Hill. There is some vista up there. You can almost see all the way to Loop Head, right across the bay and Baltard tower. I love the little village and the field system there. When the Land Commission split up the fields, they gave little strips to families,” Trea said, adding that they were funded to the tune of €8,000 by the Heritage Council to carry out the project.

The pair took about 800 photographs and explored as many cliffs, narrow roads, bogs and fields as they could manage.

“We marked stuff that was there but isn’t there now. Limekilns, for example, are a part of history. We took off with our wellies, coats, flask of tea and our sandwiches. We’d be gone for about three hours. You think you know an area. There was a famine village in Tullig (north of Cross village) but there is no sign of that now, only maybe where the barracks used to be at the top of the road. There used to be little houses there. People say ‘do you know Trusclieve and Tullig mountains?’ There are no mountains there but they have these local names and terms for things. It’s just a mound over the cliff,” Trea discovered.

“Things we entered in the audit included formations on the coast. We met a man at Trusclieve quarry. People would come along on the tractor and look at us. They’d have all the Irish names for places, which we have now logged. You could just really see the passion that people had for their home place. People have this passion and pride of place,” she found.

Local knowledge helped Trea, who runs Pure Camping with her husband, Kevin, in Querrin, to find the site for the old church in Lisdeen.
“Myself and Frances were between Lisdeen and Bansha. Sometimes we’d get out of the car and run for a couple of miles. You see things from a different angle. You’d see little quarries that are overgrown for example in Bansha, which is beautiful.

“We were trying to find a little cillin there. The road was getting dirtier. We came across an old man on a tractor; he said we’d find the site of the old Lisdeen church just there. It isn’t marked but he was able to show us where it is. That was a real find. The pillars of the old church are still there. The piers of the entrance gate are still there. They are storing bales in there now. It’s not much to look at now but, for us, it was a discovery,” Trea reflected.

“Out in Ross (Kilbaha) in Bonfield’s land, there is another little burial site. Joe Bonfield was there and is very interested. He said he thought there was nothing left of it. It’s just a strip with flat stones which are overgrown. If you look to the north you can see the Church of the Nine Saints. He told us the Robert De Ross was supposed to be buried there. He was a giant who went around taking sheep at night. Those are two things that stood out for me,” Trea reflected.

Ideally, Trea would like if the audit is utilised as a community database.

“We’d love to keep going. If it does become a community database, we can all add to it to our leisure. You need to go out onto the land to find things and you do need to talk to people. The schools are also a real cluster of local knowledge. Many of them have booklets on the local area and they have pride in their area. I think sometimes if you lose a school, you lose your identity,” she said.

Some other useful information sources for Trea and Frances included Clare County Library and The Other Clare booklet.