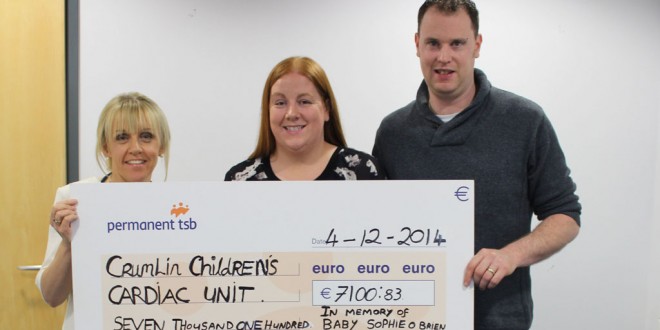 Dr Orla Franklin accepts a cheque for €7,000 for the Crumlin cardiac unit from Darren and Pamela O'Brien.

DONATIONS totalling over €11,000 have been collected by a Clare couple, who were motivated to raise money for two charitable causes, after the tragic death of their baby daughter.

Sophie O’Brien, who was born on May 6 last with a serious defect in her heart, died less than four weeks later on June 2 with her family in Ballina, Killaloe.

Darren O’Brien, Scariff, and his wife, Pamela, decided to speak publicly after their daughter’s death to raise awareness of the condition and also to ensure Sophie’s legacy lives on by raising money for two charitable causes.

Darren and Pamela are thrilled with the generosity of people who have helped them to raise €4,000 for the Ronald McDonald House behind Crumlin Hospital, where they stayed for three weeks. The funds raised will be used to help finish off renovation works in the Ronald McDonald playroom, which can cater for about 10 or 12 children.

They also raised €7,100.83 for the new €4.5 million 25-bed cardiac unit in Crumlin, where Sophie received top-class care. The couple has requested that €1,000 from this donation should be given to the play therapist in Crumlin and that the rest would be spent on general equipment in the unit.

Their main objectives were to raise €1,000 to cover the cost of erecting a plaque in Sophie’s memory in the Ronald McDonald House and €1,000 for Crumlin Hospital. Pamela said they never expected they would raise over €11,000 and acknowledged the tremendous support they have received made it a bit easier to cope with their huge loss.

“Raising over €11,000 was way beyond our dreams. It has been a bit surreal. We know that we are not going to get Sophie back but we know that she will be remembered positively. It has been a whirlwind seven months. People have been so kind. It was great that our daughter, Chloe, was involved in all the fundraising as well. She attended the Dublin City Marathon and ran the last part of the race with Darren,” she said.

“It is important for Chloe to know that her parents are continuing on with life as well and that there is some normality there. Chloe knew the barn dance was held to help Sophie’s friends, who are still in hospital. We are still in contact with a few friends who still have children in hospital. Their support has been amazing.

“It has been a lifeline for us. The staff in the Ronald McDonald House and Crumlin have been great and they have also stayed in contact with us. It wasn’t a case that we lost Sophie and everything stopped.

“Staff in University Hospital, Limerick, including Dr John Toomey and the nurse , Liz Maher, who was there on the day, have also been so supportive,” she added.

Having watched the couple from Killarney, who lost two children from Batten’s Disease, receive their People of the Year Award on Saturday, she said it was amazing that they had achieved so much having experienced the pain of losing their children. Pamela said a few of her friends had to use the Bumbleance, which the Killarney couple set up, to transport their children to and from Limerick to hospitals in Dublin.
She acknowledged everyone who supported them in any way, including their families, their family doctor, Dr Maureen Ryan, Ballina; Darren’s grandmother, Delia Moroney and staff in Chloe’s playschool.