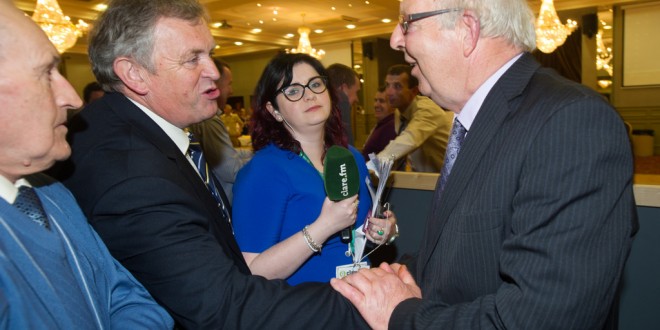 Richard Nagle of Fianna Fail is congratulated by Fine Gael's candidate Ger Kennedy after being announced as elected during the election count at The West county Hotel, Ennis. Photograph by John Kelly.

Councillor Richard Nagle, (FF) has been re-elected to Clare County Council. Shortly after 6pm Councillor Nagle was elected as the second councillor to West Clare, after Christy Curtin (NP).

Councillor Nagle paid tribute to his canvassers and all who had helped him get elected, especially his family, “who have seen very little of me over the last three months and did everything possible to support me and put up with my moods during the campaign.”

“It is equally as tough on family members as it is on the candidate because during a long campaign, extending over three months candidates have various mood swings going from highs to lows and the people living with them have to put up with those mood swings and everyone in my family helped out in several ways, not just in one way and it is as difficult, if not more difficult, for family members as it is for the candidate. Today is one of the highs and I am extremely grateful for everyone who has been involved in my campaign, for the support of the electorate and for my family,” he said.

Councillor Nagle said he was “extremely emotional and excited”.