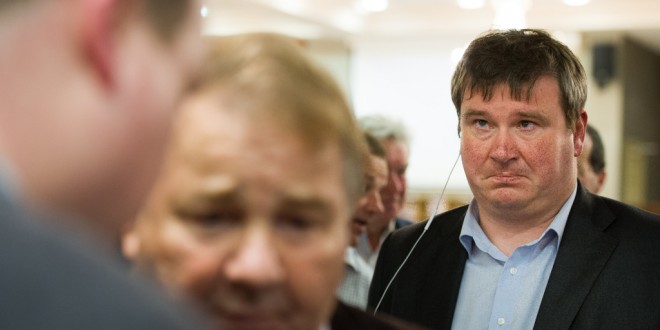 An emotional Senator Martin Conway listening to an interview on radio by Fine Gael's Bill Slattery after the latter was elected during the election count at The West county Hotel, Ennis. Photograph by John Kelly.

A clearly emotional Bill Slattery hugged an even more emotional Senator Martin Conway at the count centre in Ennis after the former was deemed elected shortly after 6pm on Sunday.

Councillor Slattery was co-opted to a seat in North Clare electoral area after Conway, then a county councillor, was elected to the Seánad in 2011.

Councillor Slattery ran in the local elections in 1999.

“I went with Martin Conway and geographically we weren’t situated that well, I being from Lahinch and he being from Ennistymon…I didn’t get elected and I haven’t been involved in politics until I was asked to go for co-option in 2011, after the election of Martin to the senate. I was very reluctant that time because I had left politics but since I was co-opted I put my head down and worked very hard for the last three years to get where I am today and it has paid off with the work I have done with the help of Senator Martin Conway and his wife Bríd, and I can’t believe the vote I got,” he commented.

The strong vote in the West Clare constituency for Councillor Slattery and fellow sitting councillor, Richard Nagle in Ennistymon, is down to North Clare voters, according to the Lahinch man.

“It fairly stands out, that the people of the Ennistymon, North Clare area wanted to keep their two councillors. I think we accumulated 3,600 votes between the two of us and it shows that the way the area was divided from Loop Head to Ballyvaughan that the people of North Clare were making sure they were given equal representation with the two candidates Richard and myself and it worked out exactly as they planned out,” Councillor Slattery concluded.

Threat of protest at Blake’s corner