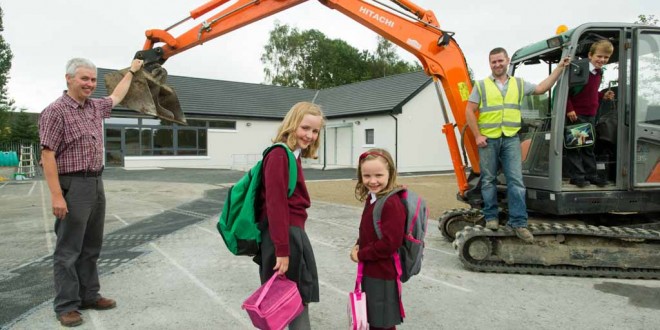 Principal of St Conaire's school in Shannon Peter Walsh, at left, with students Eimear, Roisin and Ronan, in the digger, watching the finishing touches being put to the newly built 3-classroom unit at the school with contractor Dermot Custy, of Dermot Custy Construction Ltd. Photograph by John Kelly.

FOR the last 40 years, children have been receiving education in prefabs at St Conaire’s Primary School but that’s coming to an end this week. A new extension has been built, removing the need for them.
Speaking on Monday, headmaster Peter Walsh gave some details of the new extension. “We’re opening it on Thursday. There’ll be three new classrooms and I suppose we’ll have been 60 and 70 children there, about 22 or 23 in each room. They’ll be replacing three prefabs that we had rented for about seven years.”
He said he is very pleased with the standard of the new classrooms.
“They’re fantastic, built to the highest spec. They were designed by Paul Conway and built by Dermot Custy Construction. They’re excellent. They have the best of insulation and they were designed for modern education needs. They were designed to fit an awkward site as well, so there was a lot of work done between the school and the design team.
“We will have no children in prefabs in St Conaire’s now and that’s the first time since 1973 we’ve managed that. It’s really an historic day for us in the sense that every child in the school now is in a decent classroom.
“We’ve also got high spec disabled access as well. The quality of access has been enhanced and also the surroundings of the school, it’s really been improved now. It was delivered on time and we’re very impressed with the builders. The board of management put in a huge amount of work voluntarily to deliver it. People came on board moving furniture out of the old building and things like that to move into the new one.”
He said five years after the school’s opening, the prefabs were introduced and they remained on the school’s site until this week. At one stage, a teacher had 46 pupils in one prefab.
The new design offers a chance to do different things with the school’s grounds, he added. They are looking at extending the playground and possibly putting a sensory garden in place.
He praised the scheme put in place by Minister Ruairí Quinn, which the school availed of to build the extension.
“It’s one of the really good things that Ruairí Quinn has done. Teachers wouldn’t always be saying nice things about the Minister for Education but this has been a brilliant scheme and it was delivered on time and in budget.”
The school will have 500 pupils for the new school year and the extension cost more than €300,000 to develop.
In the school’s application, it outlined what it wanted to put in place. “The development will consist of the construction of a standalone block of three permanent classrooms, total 264sqm, to replace existing temporary prefabricated classrooms, which are to be removed; relocated existing storage container; realign existing security fencing and form a hard surface play area in the location of the removed temporary classrooms with site works and services.
“The Department of Education is funding the replacement of rented prefab classrooms. It is a requirement that they are to be standalone, as they are not prepared to pay for the cost of integration into the existing.”
Minister Ruairí Quinn has said that getting children into proper classrooms is a priority now.
“We are facing massive increases in our school-going population in the coming years. Total enrolment in both primary and post-primary schools is expected to grow by over 70,000 between now and 2017 – over 45,000 at primary level and 25,000 at post primary – and will continue to grow up to at least 2024 at second level.
“We have to ensure that every child growing up in Ireland can access a place in a classroom when they go to school.”