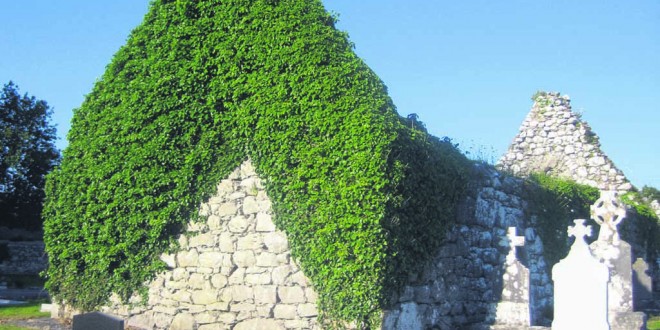 THE rich history and heritage of two well-known landmarks on the outskirts of Ennis were graphically illustrated during a recent outing as part of National Heritage Week.
Last Friday evening, more than 40 people gathered for an outing organised by heritage officer, Congella McGuire and the Clare Archaeological and Historical Society. Society secretary, Edel Greene, and Ms McGuire led the group around the old church and graveyard at Templemaley and the adjacent Ballyhee Cut.
Templemaley Church dates back to around the 10th or 11th century and very little is known about its founding saint, Maley, although his name lives on in Kilmaley and was previously associated with a spring well at Fountain, known as Tobermaley.
In the 1830s, locals believed the church was founded by St Finghin of Quin and his feast day had previously been celebrated there.
According to Ms Greene, Templemaley may have been a small monastic site that became a parish church after the church reforms of the 12th Century.
“The church itself is small and simple. Like many others, it was greatly altered in the 15th Century when the gothic single-light east window and pointed southern door were added. The south wall also contains a very early angular window and a Romanesque round-headed window, which contains incised lines and some knotwork decoration.
“The church was probably in ruins by early 17th Century.  Some early uninscribed headstones within the church and outside near the east and south walls probably represent the graves of early monks, clerics and patrons,” she recalled.
“The earliest inscribed headstone dates to 1801 and the burial ground contains the graves of residents of nearby Ballyalla House, including the Kerins, Stacpooles and O’Briens and the Enrights of Templemaley House.
“During construction of the Ballyhee Cut, the workers cut through a souterrain or underground passage, which would have been used as either storage or a place of refuge by those associated with the church,” she stated.
The Ballyhee Cut was a public works scheme that began in 1848 and was completed in 1857. Apart from providing much-needed employment for the local area, the purpose of the work was to reduce flooding of valuable meadowlands.
This was achieved by cutting a channel from Cloonteen Lake to Ballyalla Lake to reduce the output of water from Cloonteen along another course. This entailed cutting through half a mile of limestone hill to a depth of 46ft.
The works provided valuable employment to people from the Cloughleigh area of Ennis town, from Barefield, Inagh and Ruan. The works were part of a series along the River Fergus stretching from Corofin to Clarecastle and the overseer of the works was a civil engineer, John William Kelly, who was based in Jail Street, Ennis.
In his yearly reports, he makes many references to the condition of the workers, noting their weakness and inability to perform what would be a normal day’s work. The works were suspended from 1851 to 1854, due to disputes between the government and the landowners.
However, it was completed in 1857 and is visible today as a deep channel of water flowing between several feet of exposed bedrock surmounted by carefully constructed and sloped retaining walls that remain as a testament to all those who worked on it.

Previous Extension signals new dawn for Conaire’s
Next Are we being driven to distraction by in car technology?