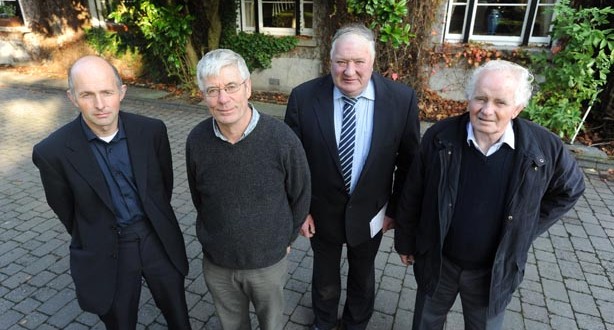 A DISPUTED right of way on the proposed site for a new Aldi supermarket “will be contested to the end”, a former mayor of Clare told an oral hearing last week.
An Bord Pleanála held a two-day hearing in Ennis last week after three separate appeals were lodged against permission for the development of the discount supermarket on the mart site in Ennistymon.
As well as the amenity value of the existing mart, Kevin O’Connor, the resident living closest to the site, described how schoolchildren, local people and firefighters at the nearby station have used a stile beside his home to access a right of way through the mart grounds for decades.
Mr O’Connor described how he is the third generation of his family to live on Churchill, his children are the fourth and his grandchildren the fifth. In cross-questioning, he estimated that the stile “must be there over 40 years”. He said he had been using it for the past four decades and his “older siblings would also have used it”.
Senior counsel for Aldi Stores Ireland Ltd, Eamon Galligan, strongly contested Mr O’Connor’s claim, saying “my client is satisfied that there is no right of way on this property”.
“The inspector and board are only concerned with planning. If there are private law issues, that is a matter for another forum,” he added.
Former mayor of the county, Flan Garvey, who was one of the parties appealing Clare County Council’s decision to allow the supermarket to be built on the site, said he was clear on the issue, that there was a right of way, saying Mr Galligan’s assertion “will be contested to the end”.
However, solicitor John Shaw for Clare County Council was unequivocal, stating there is “clearly no designated public right of way”, adding if there is a private right of way, it is not something for the oral hearing.
Mr Shaw, in his closing statement, described it as a “claimed” right of way adding, “there is no prescribed right of way across this property”. He reminded all present of the cost involved in proving a right of way in the courts, stating “anyone who thinks a public right of way is easy to prove should look to Sligo County Council and Cassidy and what happened with Lissadell”.
Mr Shaw was referring to the Supreme Court ruling that ordered Sligo County Council to pay 75% of the legal costs incurred by barristers Edward Walsh and Constance Cassidy, in addition to the council’s own costs, over a disputed right of way through the Lissadell estate owned by Mr Walsh and Ms Cassidy in County Sligo last year. The total was estimated in excess of €5 million.
Mr O’Connor accused Clare County Council of “washing their hands” of the right of way issue.
“I would have to go to court facing senior counsel like your good self,” he said to Mr Galligan, adding that he would not be in a financial position to do this. He suggested to the An Bord Pleanála inspector, Lorraine Dockery, that Aldi be directed to prove that there is no right of way, putting the onus on the international “multi-million euro company”, rather than on the local residents.