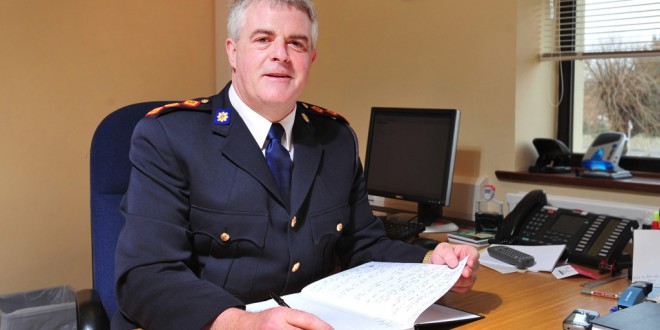 CLARE gardaí, the Criminal Assets Bureau and Revenue are to be involved in a multi-agency response to deal with local families and individuals who have unaccountable wealth and are “obviously involved in criminality”.
Chief Superintendent John Kerin, head of the Clare Garda Division, said a lack of garda investment over a five or six-year period during the recession prevented a long-term strategic approach to investigating these families and individuals.
However, he is confident that the resources are now in place to carry out numerous investigations in the county and ascertain if the wealth and assets that some have acquired were legitimately obtained.
“I had a meeting last week with my officers and I want to target a number of families and individuals myself in this county, who are obviously involved in criminality, whether it is drug-dealing, money-lending or whatever, but who are showing the signs of wealth and who don’t have a visible means of income,” he said.

“I certainly want to ensure that we tackle them again from a multi-agency perspective that having done our own analysis and research, we will be involving the Criminal Assets Bureau, we will be involving Revenue and whatever other State agencies are necessary, so that we can investigate them in a coherent strategic manner,” Chief Superintendent Kerin added.
He said this won’t happen overnight. “They’re long drawn-out investigations but certainly now that we are getting increased funding, I believe we’ve got to look more strategically at these.
“I suppose we hadn’t the resources to do so for the last five or six years and we were very much responding, rather than thinking long-term strategically about how we can address these issues,” he said.
Chief Superintendent Kerin said the additional funding the Clare Garda Division will now receive will make a big difference. “The investment in both resources and IT, coupled with additional funding to us, the organisation, will allow us to devote more resources and time and funding to address long-term strategic issues that each of us might have, which, hopefully, would tackle serious crime in each garda division.”
He said it might not be entirely obvious to people that some of the families and individuals who will be targeted are involved in criminality but said questions need to be asked and clarification received on where their wealth and assets originate.
“State agencies need to be asking these people and making them account for how they’ve been able to buy a property, how they’ve been able to buy new cars, how they’ve been able to go on foreign holidays without showing a visible means of income. Now, it’s possible they may have been involved in an accident and they may have got a payout from the accident but I think certainly a lot of those people are going to be addressed in the coming months and years here in Clare, as far as I’m concerned,” said the Chief Superintendent.