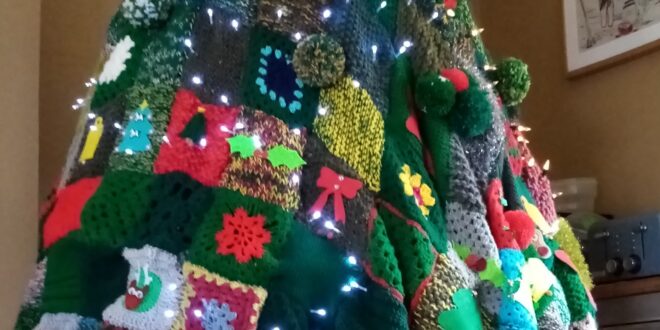 IT isn’t pine needles that make up a very special Christmas tree which has gone on display in Ennis recently. Ennis National School’s knitting and crafting club ‘The Crafty Crew’ have been busy using their knitting needles to create a community Christmas tree over the past few months.
The tree and accompanying festive display is made of hundreds of squares of knitting created by the young students along with members of their families. It is now standing proudly in the window of Insomnia in the Ennis Shopping Centre on Francis Street for all to see. Teacher Ciara Harding explains that the club for third to sixth class pupils had been meeting during their lunch-time breaks for the past two years.
“Due to Covid restrictions our club cannot go ahead as normal so we have tried to encourage the children to continue in a new way. This year from lock-down in March up to last week children, parents and grandparents have been knitting squares to collaborate in making a community Christmas Tree. Originally the idea was just to create a tree, but the squares just kept on coming. I received over 1000 squares in total and the tree has taken eight and a half months to complete!”
She expressed “huge” appreciation to the business for enabling the students to showcase their work, while also hopefully creating a festive atmosphere for shoppers in the town.
The club is run on donations of wool and knitting needles in order to enable any child from third to sixth class to be access the opportunity to learn how to knit. “We are still taking any donations of wool and needles and they may be dropped into the school reception,” she said.
If creating the tree wasn’t enough knitting fun at Ennis National School, Ms Harding added that the fifth classes in the school have begun a yarn-bombing competition, with funds raised going to charity.
“The fifth classes in the school are currently having a competition via the schools Facebook page to yarn bomb a chair. The chair with the most likes will be the winner. We are appealing to people who vote to make a small donation to Bothar . The  children have had an annual sale to raise money each year for this charity, but again because of restrictions are unable to do so. Jimmy’s have kindly supported this project and we are so grateful to them.”
She also paid tribute to the “wonderful community” at Ennis National School, saying that because of all of those who have supported the students’ efforts they have been able to strengthen the school community in a time of social distancing.