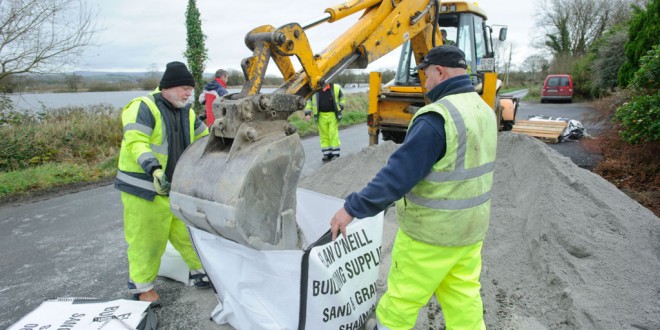 Springfield residents are hoping that the need to fill sandbags will be eliminated once the new €1.3 million flood protection embankment is constructed. Photograph by John Kelly

A GOVERNMENT minister has pledged that the construction of a new €1.3 million flood relief scheme on the outskirts of Clonlara will ensure scenes of flooded homes will “become a thing of the past”.

Minister of State with responsibility for the Office of Public Works, Patrick O’Donovan, has welcomed the approval of planning permission by An Bord Pleanála for the proposed flood relief scheme in Springfield, Clonlara.

The scheme will involve the construction of a flood protection embankment, land raising, penstock / sluice, pump station and associated works at the townland and surrounding areas of Springfield.
The project will protect 18 residential properties and will cost in the region of €1.3 million to build.

“I think everybody who has followed coverage of flooding events over the past few years will recall the scenes of flooded homes and distressed residents trying to deal with the aftermath of significant flooding in Springfield/Clonlara.

“Now that An Bord Pleanála has approved planning permission for the proposed OPW scheme in this area, these scenes will soon become a thing of the past. I welcome this important milestone and I hope the communities in Springfield, Clonlara will take encouragement from the fact that we are a step closer to the implementation of this scheme,” he said.

Minister O’Donovan thanked Clare County Council for progressing the scheme to this important stage and looked forward to seeing commencement of works.

Significant effort has been invested by the OPW, Clare County Council and the consultants Byrne Looby to ensure that a viable and compliant scheme could be identified and make it through the planning process.

Clare County Council are due to meet with the project consultants shortly to discuss a programme of works and next steps. It is anticipated that works will commence in the second quarter of 2021 and will be completed using OPW direct labour.

The Office of Public Works has a direct labour crew that specialises in this type of work, which will shorten the length of time that it will take to get on to site and start construction.

Senior engineer, Seán Lenihan explained this is a very positive development as it will eliminate the need for a protracted tender process, which will allow the council to go for construction much earlier.
Following planning approval from An Bord Pleanála, Mr Lenihan told The Clare Champion said the council have to complete the detailed design and finalise the land acquisition with a number of affected land owners who the authority has been engaging with to complete this process.

He hopes that all going well with land acquisition agreement and completion of detailed design in a timely manner, the council should be on site in early Spring.

Acknowledging Springfield has a long history of flooding, Mr Lenihan recalled it was identified as an area that required attention very early in the Catchment Flood Risk Assessment and Management (CFRAM) process.

It was one of the first schemes that was allocated funding by former Minister of State with responsibility for the OPW, Kevin “Boxer” Moran in the summer of 2018.

The ESB manage the levels of the River Shannon at Parteen Weir in terms of the amount of water that goes through the Head Race Canal through Ardnacrusha Power Station.

During periods of heavy rainfall when the volume of Parteen Weir exceeds the amount that can be discharged through the Head Race Canal the amount of water coming through the old route of the River Shannon is increased, which results in flooding downstream.

Mr Lenihan outlined the council is always vigilant to the risk of flooding in Springfield and has provided significant assistance to the local community during previous flooding incidences.

He confirmed the council is also working with other stakeholders such as the OPW, the ESB and other agencies in terms of the management of the River Shannon.

Asked about the possibility of dredging as a means of reducing the risk of flooding over the coming months, he said there is a Lower Shannon Hydrogeomorphology Group examining what might be the best approach concerning this matter.

He said there are a lot of different bodies with responsibility for the River Shannon including local authorities, ESB, Transport Infrastructure Ireland (TII) and other agencies have to come together, which is happening under the stewardship of the OPW.

In a recent update for councillors, the council stated a consultant hydrologist has been engaged
to provide a report on karst features in the location and their impact if any on the design of the scheme.

Work is also continuing by the council’s appointed consultants, Byrne Looby and Partners, on the final design. 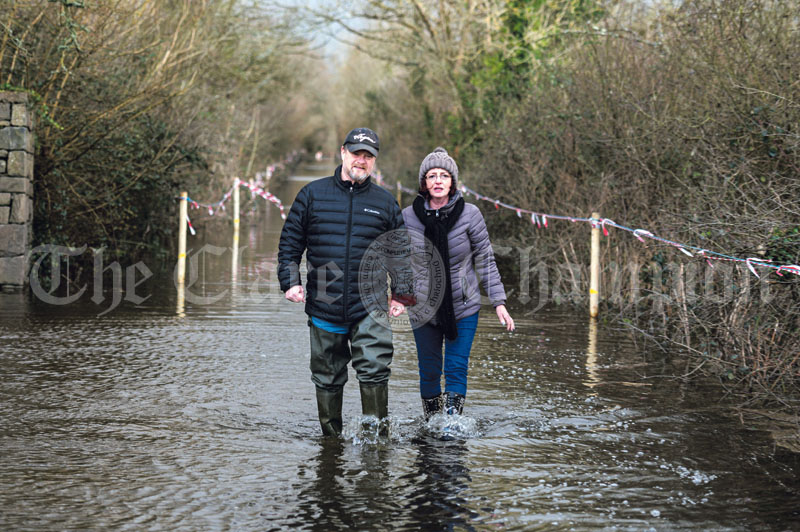