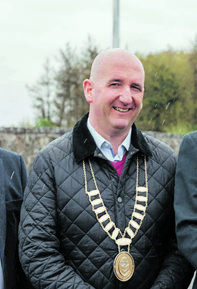 CLARECASTLE’S Councillor Paul Murphy said he is “honoured” to don the chain of office after his election as the new Mayor of the Ennis Municipal District. The occasion, usually marked with handshakes and hugs of congratulations, was a very different affair this year with social distancing due to Covid-19.
Taking the helm of the Ennis Municipal District meeting this week following his election the councillor admitted “Not being able to shake hands, it’s surreal. Hopefully going forward Covid will die down and we can revert back to what we normally are. I miss the warmth of a handshake or an embrace from a friend.”
He paid tribute to his predecessor Councillor Johnny Flynn describing him as a “shining beacon for the town, a real townie”.
He outlined that there is a lot of work ongoing within the district, including the development of the mobility plan which has proved valuable in adapting to Covid-19.
Councillor Murphy believes that the strives made in the introduction of a temporary mobility plan to allow social distancing means that Ennis is a “step ahead” of other towns when it comes to competing in the domestic tourism market. He said that the message needs to get out that Ennis is welcoming tourists saying there is a “buzz of expectation”. He acknowledged the work of various council departments including the roads and engineering staff.
The councillor’s proud family were present at the meeting, with Councillor Murphy calling his wife Siobhan, “the backbone of my household”.
Describing himself as a “very proud Magpie” he said that when it comes to the council he looks at the “bigger picture” and what is good for the entire district. He believes that both Ennis and Clarecastle “complement each other” while he will also work for the outlying areas of electoral area.
He vowed to continue bringing safety concerns about the Clareabbey roundabout to Transport Infrastructure Ireland, “especially now people are walking and cycling more, people should be able to safely”.
The new mayor also took the opportunity to welcome the installation of a lifeguard at Ballyalla and praise the work of Tidy Towns groups. He said he looks forward to working with the rest of the council in the year, saying he believes “A straight forward approach is the best approach”.
The election of Councillor Murphy as mayor was proposed by Councillor Ann Norton who commented, “The work Paul has done since becoming an elected member has been huge.” The proposal was seconded by Councillor Clare Colleran Molloy who outlined his “wealth of experience”. He was congratulated by the other members, with Councillor Pat Daly quipping the avid cycler should bring his bike to some official functions. This prompted Councillor Flynn to comment he would have to deal with two chains.
Councillor Mark Nestor, who was first elected to the council last year, was named as deputy mayor of the district. He was nominated by Councillor Daly who said he was “A new kid on the block who has proven to be an outstanding councillor.” This was seconded by Councillor Colleran Molloy who commented, “deputy mayor within a year is quite an achievement but it is well deserved.” The nomination was supported by all other members of the council.

IT’S a case of Philadelphia Here I Come for Ennis musician SON, Susan O’Neill, however …