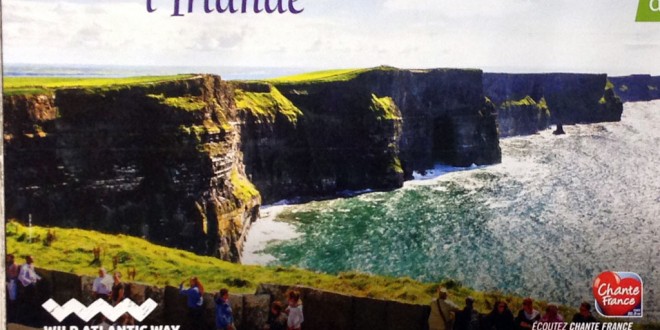 Billboard ad in Paris metro, featuring the Cliffs of Moher.

Millions of French commuters are seeing ads for Ireland, featuring the Cliffs of Moher, on large billboard posters as they pass through the busy metro stations of Paris.

Tourism Ireland in France has teamed up with a leading online travel agent – Go Voyages – once again this year for a joint promotional campaign. Some 660 billboard ads are prominently displayed in metro stations across the French capital, grabbing the attention of commuters with beautiful images of the Cliffs of Moher and the Causeway Coastal Route and featuring attractive offers for a weekend break – reminding them why they should put the island of Ireland on their holiday wish-list for 2016.

Elmagh Killeen, Tourism Ireland’s manager for southern Europe, said: “2015 was the third consecutive record-breaking year for French visitors to Ireland and we are undertaking an extensive programme of promotions throughout 2016, to keep the momentum going and build on that growth. Our spring campaign with Go Voyages is an important element of that programme, to boost travel to the island of Ireland.”

Co-operative campaigns with other key partners like Brittany Ferries, Transavia, Irish Ferries and EasyJet are either under way or in the pipeline for the coming weeks.