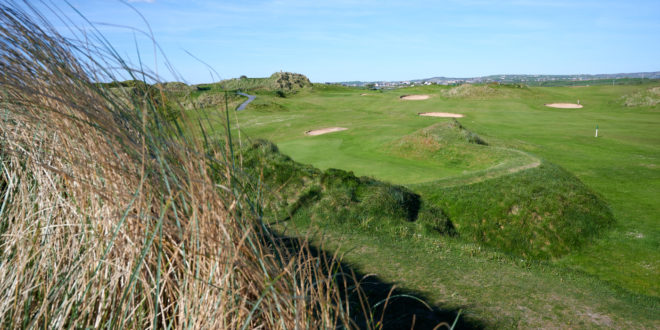 The first local sporting activity since the outbreak of COVID-19 is set to get underway next week as golf courses around the county open their doors once more.

A set of protocols from the Golfing Union of Ireland outline the terms and conditions under which the sport can resume, with only casual golf allowed for the moment under strict guidelines and time constraints.

The protocol is aligned to the five planned phases of the Government’s Roadmap and sets out how the restrictions on golf will be eased over the coming months.

From Monday May 18, all tee times must be booked in advance either online or by phone with only fully paid up members permitted out on course. 3-balls will be played at 14 minute intervals, there will be 12 minute intervals for 2-balls while individual players will be on 10 minute intervals. Clubhouses will be closed with pro shops allowed open only for the purpose of checking in for tee times.

The initial phase will last until June 8, at which point closed competitions will resume while members will be permitted to bring guests under Phase 2 of the Government’s roadmap.

The guidelines also outline measures such as the supply of hand sanitiser, alterations to the hole and cup to allow for easier retrieval of balls and signage to enforce social distancing.

Ahead of the courses around the county reopening, Derrick Lynch spoke to some of them to see how they have been adapting over the last few weeks.

The focus around the country is on getting courses ready for action once more, but at Spanish Point Golf Club, there are plans in place for even further development.

The club was also awarded funding from a Sports Capital Grant with the money being used to develop a short game area to enhance the facilities already available at the club. It is all part of the plan which is working toward a big year for Spanish Point Golf Club in 2021 when they will mark their 125th anniversary.

The 124th year might have been cut a little shorter than planned when COVID-19 restrictions forced the closure of the course but club PRO Mervin Hehir says everyone understood that it was a necessary call to make.

“It was not an easy decision to close down but the safety of our staff and members was paramount. The members have been very supportive and they understand the situation. Spanish Point Golf Club is owned by the members and it is a voluntary organisation so it is the members that keep things going when times are tough. The course is in the best condition it has ever been in. The work has been ongoing right throughout the last few weeks and we were lucky in the sense that we did not have to lay off either of our two staff” he outlined.

With the guidelines for reopening now established, Mervin says their membership have been well informed on how the systems will operate and is confident of a positive outlook for the remainder of the year.

“There is a real sense of excitement among the membership now that the reopening date is upon us. We have software called ClubV1 which is management software for the club. We have developed an online tee time app for the members and there will be a tee sheet for every day. We will be able to adhere to the guidelines and filling out that sheet within those regulations. We are ready to go and we have been in contact with the members on how to use that facility. It will be mandatory that you are a fully paid up member and you have to book your tee time on the online system. That will help to address social distancing and ensure that people are within all the guidelines. We are delighted to be able to reopen and we think there will be an opportunity for us to showcase our course where people can play in a safe environment. People may decide to join up because it is an outlet for them and if we have all the structures in place, then that is an important part of how we operate the facility for the local community” he said.

The fairways at East Clare Golf Club may have been quieter than usual in recent weeks but there are some things that COVID-19 has not had an impact on. With a sprawling 150 acre expanse, the natural flora and fauna of the area continues to flourish, while a seasonal visitor has made his return. The word in East Clare is that the cuckoo is usually first heard around the golf club and according to club chairman Pat McNamara, 2020 has been no different in that respect.

“We have fabulous wildlife around the course and we have a number of lakes so there are plenty swans and ducks around and we are noted for the odd fox rambling across the course. It is generally the first place that people hear the cuckoo when he arrives so he has belting away there for the last while” he laughed.

There are roughly 300 members at East Clare Golf Club at the moment waiting to get back on the course and Pat admits while everyone is looking forward to resuming their game, there is an acceptance that safety has to be paramount.

“We are chomping at the bit to get back on the course and while it has been a long few weeks to get back, we are not the only ones in this boat. There are a lot of serious cases out there and I think everyone is aware of all the work that is going on with our healthcare workers and all the frontline staff so it puts it into perspective. We are delighted to have got the go ahead to play but ever before we closed, we had already put strict policies in place for people going out on the course like others had too. It is great to be able to reopen because we have heard several of cases of clubs who won’t be opening their doors again after this. We have a great group of people involved and there is a real sense of community. We have two lads working full-time and thankfully they were given permission to stay working and maintain the course over the last few weeks. We have a large body of volunteers who helped out and they all followed guidelines as required” he said.

There will be a raft of new guidelines to adhere to but Pat is confident people will make the most of the situation in a positive light.

“It will be strictly on timesheet and we need to know exactly who is on the course. There will be no green fees allowed because it is hard to track the people who are coming in, so it will be members only whether existing or new. It is a chance for people who had given up golf or never really thought about it to now join up and get involved. It is not all doom and gloom either, there are opportunities there and we are hoping to make the most of them. We are positive for the future and the course is looking magnificent. We have tried to make the course as playable as possible over the last few weeks and the place is looking great. We are a rural club and a large portion of the membership would use it as their social outing and people come for the chat to discuss hurling or politics or whatever is going on” he noted.

As the date for reopening approaches, all involved at Kilrush Golf Club are looking forward to getting back out onto the course with the focus in recent weeks being on making sure it is in top order for that return to action.

The course was originally opened as a 9-hole course in 1934 before expanding to 18-holes in 1994. The club is noted for a particularly strong junior section with the likes of Shane Lillis making waves on the American scene in recent times.

2020 men’s captain Kevin Clancy says everyone is looking forward to getting back onto the first tee.

“We can’t wait to get back out at the moment, particularly with the weather we are having and the condition that our course is in. The break has really done the course good and we have had a brilliant response from our green-keeping staff and volunteers for the maintenance work that had to be done so it is in great shape at the moment. We had started some of that work on greens and tee boxes before the COVID-19 outbreak so that break has given that work a chance to bed in so hopefully now in the coming days we will all be back out there to make the most of it” he said.

With no green fees allowed until late phases of reopening, it means another income stream for clubs has been affected. Kevin says the response from members has helped the club to keep above the waterline.

“We have about 400 members including juniors and we are lucky because the membership fees have come in over the last few months and people are really supportive of the club. It is important to have that support because we would have a loss of revenue from not having green fees, societies or competitions to draw on. The members have really stepped up and that is great to see. We will have work to do to implement the measures outlined and the clubhouse will remain closed for the foreseeable future. It will be just a case of going to the tee at your appointed time and leaving straight after. It is a positive story though in the sense that we are in a position to reopen and the great thing about golf is that is a sport for five year olds to 95-year olds so it goes across the whole community. There is also a huge mental health aspect for golf, and I think we will really see it with some of the older members who have been cocooning over the last while. It will be great for them to be able to get out for a round and get that time in the fresh air. There will be some opportunities out of this too hopefully from a membership point of view. With other sports looking like they will take some time to come back on stream, we might see more people signing up to be members in order to play and we would welcome anyone who wants to do that. There is no harm in people trying it out for while and seeing how they get on. At the moment, we are just glad to be able to keep the doors open because we have seen clubs across Munster having to take that decision to wind up” he noted.

O’Connell: Club Camogie Has To Return Before County